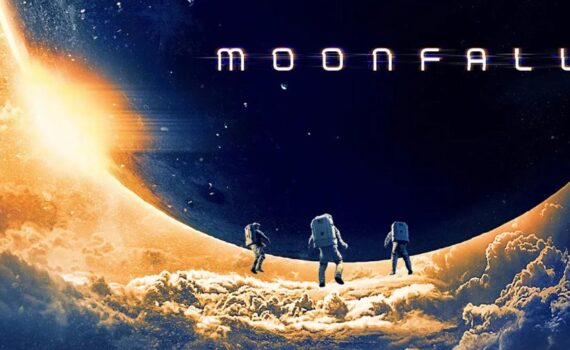 You know what you’re getting when you sit down in front of a Roland Emmerich movie, so you’ve got no one to blame when it turns out to be an epic disaster.  Well, sometimes it’s not, sometimes it’s fun, maybe *while* being an epic disaster, but still a fun time.  Moonfall lands in the bad category though, one of those films that’s such an embarrassment to watch you can’t imagine what it must be like to have been a part of making it.

So the Moon has gone out of orbit, which spells big trouble for all of us down here on Earth.  The Moon is coming closer and closer, until disasters wreak havoc on every continent, the oceans rise up, and even gravity isn’t what it once was.  Disgraced astronaut Brian Harper, his old partner Jocinda Fowler, and crackpot conspiracy theorist KC Houseman will travel into space to find out what, or *who*, is messing with the Moon, and hopefully fix it before our entire planet dies.

So, I would have been OK with a ridiculous disaster movie, those are fun.  We’ve seen them before from Emmerich, he knows how to have a good time, that’s not the problem at all.  Give me space and danger and cheese and aliens and adventure, I’ll eat it up, it’s all in good fun.  But what I don’t like, and what I was shocked by, were the story lines back on Earth; anyone who had anything to do with the plot or the characters or the acting as it relates to the story down home while the heroes were in space should be ashamed & fired.  I can’t begin to explain how bad Charlie Plummer, Michael Pena, & Co. were, how stupid that story was, and how it ruined anything entertaining that the rest of the film might have had to offer.  But, really, all the acting was bad, the three mains were hideous, this movie is complete trash, and may god have mercy on our souls.