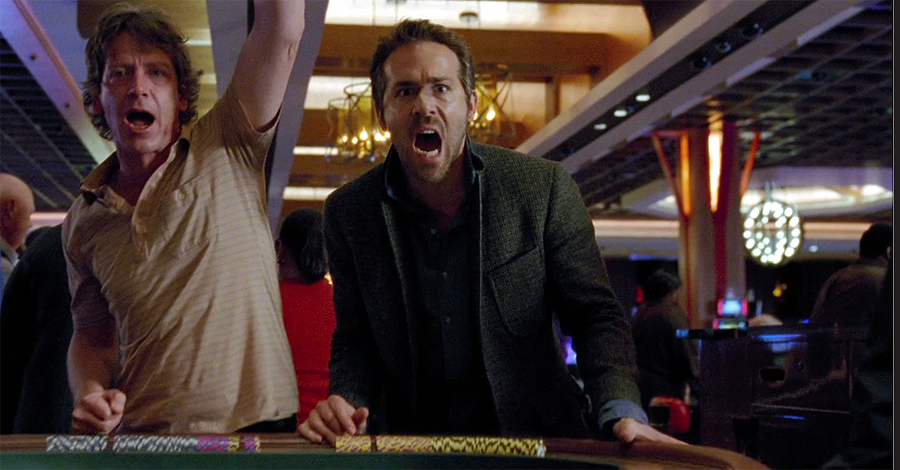 Sometimes it’s just obvious that a movie has “it”.  Watching the trailer for Mississippi Grind I knew (or thought or hoped or something) that it would be a smash success.  Ben Mendelsohn has been on some kind of roll, playing villains to perfection, bringing a depth of character to the screen that we haven’t seen it years.  And Ryan Reynolds, though he seems to always choose the wrong part, is at his core a phenomenal natural actor.  I’m serious, and I swear I knew it all the way back in the days of Two Guys; Reynolds is a special talent.  He just needed someone brilliant to be his costar, a script that worked with him, a film that set him up to win big.  This movie is exactly what he needed as an actor and exactly what I wanted as an audience member.

Talk about bad luck, Gerry is the epitome of loss.  His wife & daughter are gone, he hates his day job, he’s addicted to gambling, owes big all over town, and is about to have his body pay the bill he habitually can’t cover.  But things are about to take a turn for the lucky, and it’s all thanks to Curtis.  This free-spirited high-roller doesn’t seem to care whether he wins or loses, plays for fun, buys strangers drinks, and befriends a lonely Gerry just when her needed it most.  And since Curtis seems to be such a good luck charm, Gerry decides that it’s high time to hit the Mississippi gambling trail, make all the money he ever dreamed of, pay off all his debts, and finally be happy.  This, of course, isn’t exactly how the story plays out, and this duo will discover that darkness is a companion you don’t ditch easily.

Ben Mendelsohn first, and my take on his performance will be short & sweet; perfection.  He played Gerry to perfection, layered his character like an onion, gave us vulnerability like we’ve never seen before, and completely blew me away.  Next up, Reynolds, in what will probably go down as the best performance of his career.  Curtis was a liar through & through, both to himself and to his friends, but never once was unlikeable.  How do you do that?  I don’t know, but Ryan Reynolds figured it out, and put Green Lantern a hundred miles behind him in the process.  The film was a whole had a great gambling vibe, touched on many American cities along the road trip, presented a cool feel, and yet developed a base of extreme sadness to help audiences understand these two desperate men.  They weren’t heroes in any way, but were relatable in a familiar fashion, depressingly possible, and as real as it gets.  Mississippi Grind is just what its name suggests; a torturous trek down the river, searching for hope where none exists, trying to stay above water for one more day.  But this dark story is presented so well that the film becomes almost necessary, like we needed to see this happen, and like we won’t soon forget what we learned.