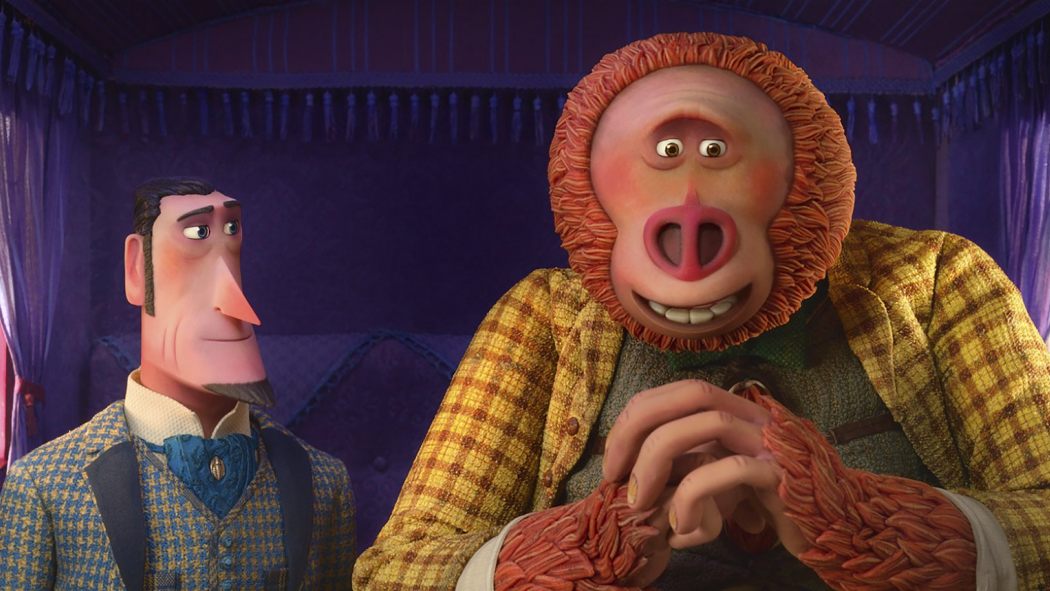 My reaction to the Missing Link trailer in January was doubtful, and I quote: “It’s hard to imagine this movie reaching the same level as other Laika films (Coraline, ParaNorman, Boxtrolls, Kubo); it just doesn’t have that same feel.  I’m sure the animation will be spectacular, what they do is so wonderful, I just don’t see any real reason to watch other than the production company’s fame.  I hope I’m wrong.”  Update: I wasn’t wrong.  Missing Link doesn’t bring the magic that Laika’s others have almost guaranteed from the first still image, failing to live up to the hype built up by audiences’ expectations when they imagine what stop-motion marvels might be next.  Good not great, it’s a project that leaves us wanting more, wanting something else, hoping that the next batter up will be a stronger hitter.

Sir Lionel Frost is the greatest adventurer that the world has never heard of, all his discoveries undocumented or unbelieved.  Wanting desperately to be accepted as part of the club of famous hunters and explorers, Frost doesn’t go for the easy bait, he sets his sights a little higher: dodos, mermaids, the Loch Ness monster.  But no one believes he can find something that has never been seen before, not even when he receives a letter inviting him to the American Northwest to view proof of the legendary Sasquatch.  In fact, he meets the Bigfoot, a kind and confused primitive man/giant animal who Frost calls Mr. Link.  The creature is gentle and can speak English, wanting only to find others of his kind with the help of a talented adventurer, starting a journey in which the pair will become friends, learn lessons, and experience wonders never before beheld by the eyes of man or beast.

Audiences will most assuredly be underwhelmed by Missing Link, a pleasant movie without any punches to throw other than the feat of its animation.  And that part can’t be ignored; it’s indescribably impressive how this team can create this films using stop-motion, how something so amazingly difficult can look this spectacular.  The motion isn’t played safe either, there are intense action sequences throughout, when your mind won’t be able to believe what your eyes are seeing.  The art from beginning to end is excellent, so beautiful, it must have taken so many so long to create something so lovely and complex; no matter what my opinion of the plot and delivery, there is no way I can watch a marvel like this and not clap.  However, and unfortunately, that’s not all there is to a theatre experience.

Coraline is dark, ParaNorman is cool, Boxtrolls is funny, Kubo is epic, but Missing Link simply doesn’t have anything to grab on to when it loses its footing, and it slips early and often.  The story is thin, the characters thinner, and the dialogue is surprisingly weak, with jokes that fall flat and a lack of music that’s both evident and confusing.  Much of the movie is fairly boring, and I didn’t need more action, when there was action present it was very nice, but I did need more …something: heart, depth, oomph, something.  Even my kids, who love everything from Laika to Disney, Ghibli to DreamWorks, left unaffected for the most part, underwhelmed by a seeming lack of effort to produce anything worth watching other than the animation.  I think I would have rather watched a documentary on how the the film was made, rather than the film itself, and that’s not good.