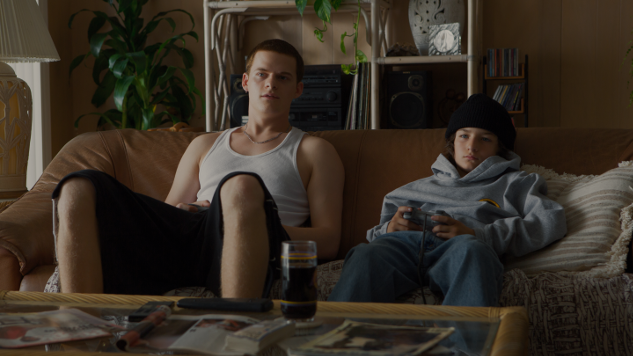 Stevie needs an escape, and the kids at the skateboard shop look cool, so in he goes to discover a new life.  His mom had a rough start, had kids young, works hard to support her sons, and loves Stevie very much, but it as far from cool as the Sun.  His brother, Ian, is private and angry and violent, hiding behind his neatly organized room and his expensively collected wardrobe because he fears reality.  Which leaves Stevie on his own, but he’s about to find his true family, the boys on the boards.  These skaters take nothing seriously and take no one’s shit, smoking and drinking and trespassing because they want to, not because they have permission.  It’s a life that Stevie didn’t know existed, but now that he’s had a taste he can’t get enough, and his next choices will be his most pivotal, as a boy becomes a man amid the decay of the city and the influence of its forgotten children. Jonah Hill is a first time director and many in this cast are first time actors, which only bolsters the feeling that we didn’t just watch a movie, we experienced a snapshot season in the lives of a bunch of local kids who have stopped giving a fuck and have started skating instead.  This is the dirty secret, the harsh truth, the unblinking look, a map of mid-90s culture as followed by kids on the street of LA, and here are the players to prove it.  Hill grew up here, perhaps he was Stevie, perhaps he was a witness, but the nostalgia hits hard, even if this wasn’t you, because this team bring the story into your life as if it was.  I didn’t grow up exactly like this, but a coming-of-age tale told this well and so starkly smacks everyone in the face with the same power, demanding that you turn your head to watch.

I liked Sunny Suljic in The Killing of a Sacred Deer and I loved him in Mid90s, a role he was perfect for, one part hard and one part pliable, a kid trying to do his best without a guide to show him how.  Lucas Hedges was a great evil older brother, with just a touch of sensitivity under the surface that was difficult to watch because it felt so fragile.  And the crew stole the show, this group of amateurs who were just here to skate, to help perfectly capture the mood of the time and the magic of the sport.  I saw it said that Mid90s is a first skate movie to actually be good, and I couldn’t agree more; it’s more than a message about the craft, it’s a kaleidoscope of tiny moments that together form something beautiful.  The grainy camerawork, the time capsule references, the freedom, the camaraderie, the off-the-wall humor; this film isn’t a masterpiece in oil, it’s a mosaic in graffiti, but no less stunning.