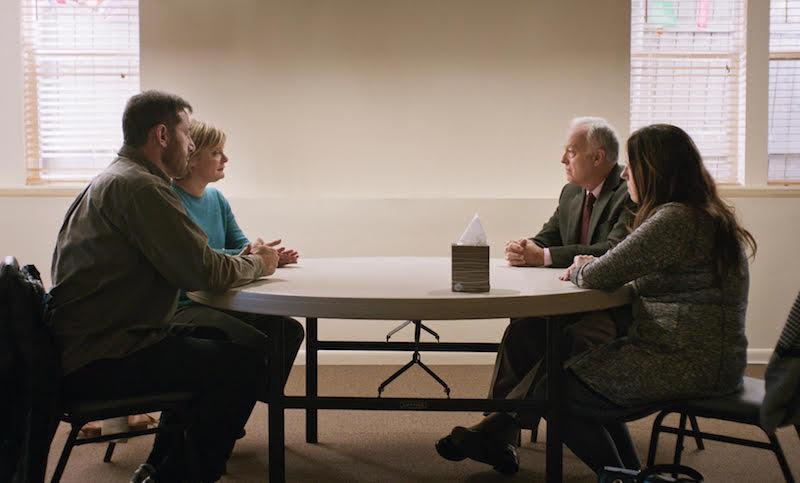 Directed by the stoner guy from Cabin in the Woods, starring that random friend from The Goonies, centered on a mass shooting, and solidly in Oscar conversations?  What now?  Mass is a movie of odd choices and random pieces, but so simple at its core that it somehow just works anyway.  I don’t know if Kranz was a good director, I don’t know if these people were good actors, I don’t know if this subject matter needed to be addressed in this way, but somehow Mass works, and I guess that’s a compliment to …someone.

After a tragedy involving their children, two couples reluctantly meet to discuss their feelings, to get answers, and, ultimately, to allow the healing process to begin.  We learn more about the details of the shooting as the conversation develops, but there are no twists here, just ruthless death, no happy endings, just honest pain.  Jay & Gail just want to know why, Linda & Richard struggle to provide solace, and each person will have to come to terms with what happened before they can move on from it toward whatever might be waiting in the future, be it redemption or emptiness.

Rudderless tells a similar story more conventionally, and I’d recommend you start there if this subject is something you need to see portrayed; it’s a little more mainstream but not less powerful.  And Mass does have power, it has something to say and says it honestly; I just wonder how many want to hear it so bluntly.  It’s hard to watch, hard to talk about, and very moving; a well-written film from every emotional angle.  Isaacs was brilliant as a grieving father, but I didn’t like his wife, played by Martha Plimpton; she was definitely the weakest link.  Starring only four adults, shot over only two weeks, Mass is a gut-wrenching story that you won’t want to sit through, but only because what it talks about so passionately is something we never want to have to acknowledge.  It’s difficult to call this one of the year’s best, but it probably is, even if I’d never want to watch it again.