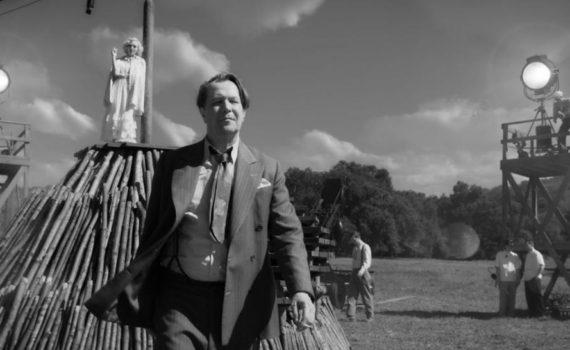 I read somewhere that Mank was an attempt to pretend that screenwriters could be main characters, and I felt that fiction throughout the entire film.  Perhaps we should care more about the writer of the film than the director, or even the producer, but it seems that the director gets all the credit, deserved or not.  But to wish that so does not make it so; audiences remember the director’s name, they give the director the respect and the actors the applause, that’s simply the way it is.  To make a screenwriter a main character is an undertaking that, perhaps, we simply don’t care to watch, because we don’t want the words, we want the emotions, and the emotions come through on camera.  Citizen Kane is an icon for what it was, not for what its script was, and therein lies the problem with Mank as a whole.  It’s a film we just don’t care enough about, and one that bores us by telling us over & over again why we should.

Orson Wells, new to Hollywood and to the screen, tasked veteran screenwriter Herman Mankiewicz with creating a story to blow all studios and audiences away, to impress the world with an original work to mark the age.  And, astonishingly, that’s exactly what he did.  Mank wrote Citizen Kane, which Orson would later rewrite, director, star in, and claim as his magnum opus, but it was Mank who laid the groundwork, mostly in a bed recovering from an accident and drinking himself into a stupor.  Mank was an ancient alcoholic at the age of 40, and had burned more bridges than he could count, but his life as a writer was the stuff of legend and his talent was unmatched.  That’s why Wells went to him for a masterpiece, because he was capable of it, even if he was barely capable of taking off his own clothes before falling into bed stone drunk.

To say that Mank isn’t a typical David Fincher movie is the understatement of the century.  Alien 3, Se7en, The Game, Fight Club, Panic Room, Zodiac, Benjamin Button, Social Network, Girl with the Dragon Tattoo, Gone Girl; that’s his style, that’s his element, that’s where the magic happens, in drama and intensity and emotion and perplexity, not in some black & white biography that’s simply hero worship of the rarest kind.  Whose hero is a drunken screenwriter who only wrote one or two things you’ve ever heard of?  I know one of them was Citizen Kane, but that’s Orson’s baby, not Mank’s, and is some ways this story about that man simply doesn’t deserve to be told.  Fincher goes on a rogue project here, has his dad right the screenplay, and expects awards?  I don’t think so.  Mank is boring, bloated, reeks of Old Hollywood worship, and is probably worse than other features we instantly threw away because they weren’t special, like Trumbo or Rules Don’t Apply.  The only reasons we’re watching this film are because it’s tied to Citizen Kane, which carries a certain mystique, and because we respect Fincher, which he has earned.  Sadly, this latest is simply dull, hard to watch, and not nearly as needed as it tries to be.