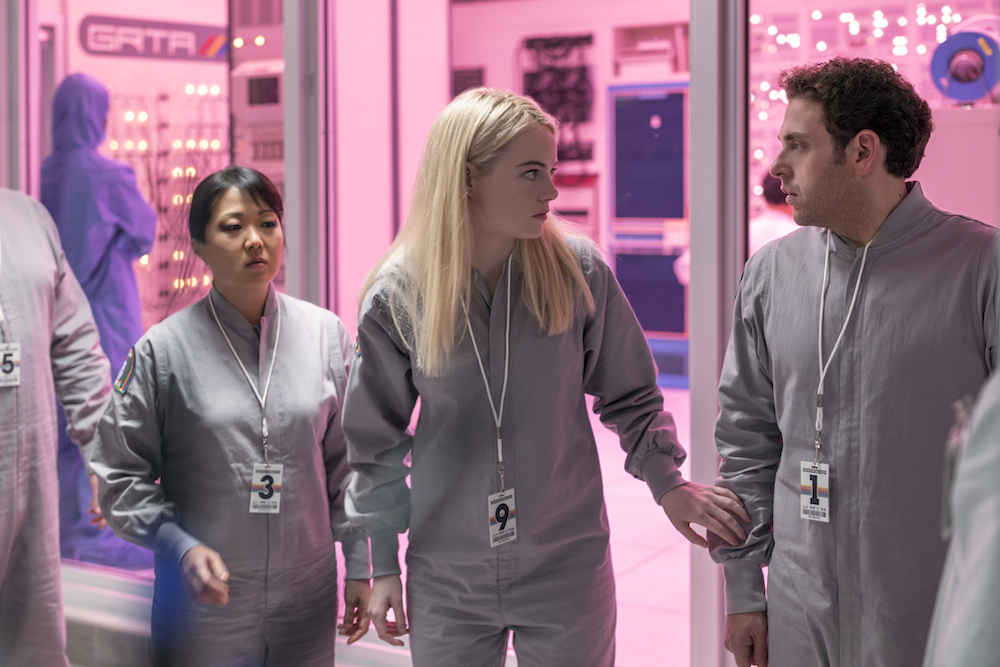 Is the Year of Jonah Hill happening right now?  I think so, and I think I like it.  Don’t Worry, He Won’t Get Far on Foot was an under-the-radar success, Maniac is an incredibly original Netflix mini-series, he just hosted Saturday Night Live, and then there’s Mid90s, which he wrote and directed and which is one of my absolute favorites.  I’d say that’s a pretty good 2018, the kid is really coming into his own, and he’s definitely come a long way since he & Emma Stone starred together in Superbad in 2007; seems much longer than 11 years ago, seems like another age altogether.  But here they are back together again to lead this oddball creation, and I can’t imagine that any other duo would have sufficed.  Maniac is a niche drama for sure, it can’t possibly land well with all audiences, but its entire team gave their entire attention to making it a wacky yet wonderful surprise hit.

In the near future or a similar universe or a neighboring plane or something like that, two distinctly lost souls will find each other in the strangest place possible.  Owen is the psychologically disturbed misfit son of a wealthy family who has never felt like part of the love, and who gets secret, imagined instructions from a brother he doesn’t have telling him to stay alert because he’s gonna save the world soon.  Annie is an addict who has lost her family to tragedy, someone who is on the verge of giving up and has no one to turn to.  Both sign up, for very different reasons, for a clinical trial at a giant pharmaceutical company’s headquarters, testing a drug they know nothing about.  It’s purpose is to replace therapy; to force your mind to remember the most traumatic event of your life, to outwit your defenses, and to force you to confront your demons.  It’s all led by a supercomputer who has gotten too smart and scientists who are only half sane and half capable; what could go wrong?

I’ve never seen anything quite like Maniac.  Futuristic, alternative, sci-fi, comedic, so so weird; and that’s just the foundation.  AI, rainbows, elves, gangsters, lemurs, magic, psychosomatic blindness; this plot will go anywhere it wants and you can’t possibly stop it.  Each episode is unique, some take you into fantasy realms, some into dreams, some stay in the prison-like facility, some force the leads to face their worst nightmares in order to get past them.  There’s a lot going on here, to say the least, and you need to be sucked in from the beginning in order to enjoy it, because otherwise I think it would just come across as plain weird.  Hill and Stone put on a ton of hats for these 10 episodes, and they are great in each, especially Stone, who I have rarely seen better.  But I think Theroux steals the show; he’s perfect as the unstable creator of the entire program, even making the artificial intelligence in the form of his overbearing mother, played by Sally Field.  Netflix got it right this time around, with a quirky short-run series that’s full of dark thoughts and pure entertainment.