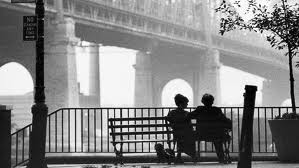 Woody Allen is a polarizing figure; you either love him or you hate him.  His films are extremely self-centered, always about tangled neurotic love, stuffed with Jew jokes, usually set in New York, full of harsh sexual humor, and often consist of him speaking very quickly for about ninety minutes.  However, he must be doing something right, as so many of his movies are considered film and cult classics: Annie Hall, Deconstructing Harry, Hollywood Ending, Midnight in Paris.  He does a lot right for a lot of people and nothing right for a few.  As for me, I’m a fan, and I have never seen a better Woody Allen film than Manhattan.
Taking place in, you guessed it, New York City, the story is exactly what you would expect; an aging Jewish man, Isaac, living in Manhattan, twice divorced, dating a high schooler, writing novels and for television, walking around in a self-loathing fog.  That is, until he meets Mary.  She is everything that annoys him and makes him anxious; confident, intellectual, beautiful, talkative, neurotic.  And as he begins to fall in love with her, he can picture himself having a happy future for the first time.  This love story is as beautiful and dysfunctional as NYC itself, enveloping many lives and breaking many hearts.
I knew going into it that I would like Manhattan because it’s classic Woody Allen.  I knew I would like the New York vibe, the quick wit, and the comedic anxiety.  But I didn’t know that Woody Allen as a director would shine so brightly in this film.  Scene after scene was perfectly shot, creating a cinematic masterpiece that should be shown in every Film 101 class in the nation.  Set all in black & white, there was a mood and a feeling that permeated the story, and allowed for some great acting against a wonderful backdrop.  The movie was quick, engaging, hilarious, and set a high standard for romantic comedies that has only ever been matched by When Harry Met Sally.  If you love film you have got to see Manhattan; it defines the term.

Woody Allen has a way of flashing life before you on the screen and helping you see the tragedy, comedy, mundane and exciting aspect of every moment. This film does that.