Movie Review – Man on the Moon 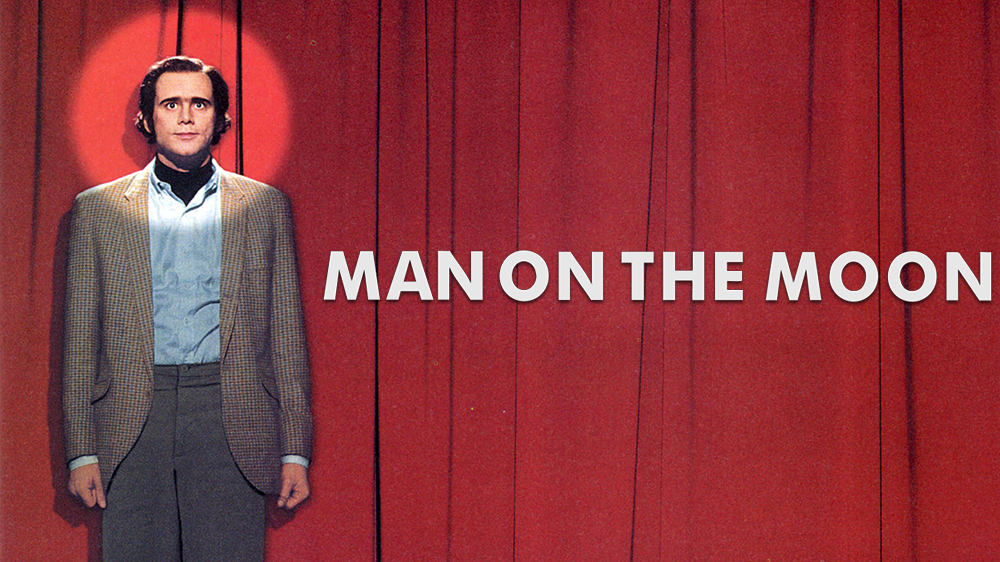 Movie Review – Man on the Moon

When I was a kid I wasn’t what you would call outgoing.  I liked to stay at home, play sports with my dad, run around outside with my sister, watch movies with my family, bake cookies with my mom.  During the summers when I was off from school nothing really changed except that I got to stay up later.  Our house didn’t have air conditioning and in July the upstairs became stifling.  So I would often sleep on the couch in the living room with a fan blowing directly on me and stay up really later watching TV.  My program of choice was Nick at Nite.  During the 90s the late-night shows on that channel were some of my favorite classic reruns: The Dick Van Dyke Show, The Bob Newhart Show (not to be confused with Newhart), The Munsters, and Taxi.  I loved the varied characters on Taxi and the amazing actors that I was always seeing in other movies and TV shows; Marilu Henner, Judd Hirsch, Danny DeVito, Tony Danza, Jeff Conaway, Christopher Lloyd, and of course Andy Kaufman.  That was my only exposure to Andy, as he died the year after I was born, but that was enough.  Latka was one of my favorite TV characters, one I loved but never fully appreciated until I watched Man on the Moon, a movie that gives depth to one of the most confusing entertainers of all time.

This film is the story of Andy Kaufman, a born showman who wasn’t a comedian, who wasn’t a singer, who wasn’t an actor, but somehow was a little of all rolled into one very strange individual.  It is based on Andy’s real life career, persona, and the behind-the-scenes reality that we never saw.  Andy grew up in New York in a middle-class Jewish family.  He was an odd child, often performing for no audiences, making himself laugh, practicing a form of comedy that didn’t involve jokes.  When he attempted to become a professional comedian, this form of humor fell flat on audiences who weren’t used to feeling uncomfortable or sitting in silence while a very unique man did voices and sang songs.  Eventually, Andy would make a splash as more and more people took notice of his off-brand comedy, including his agent George Shapiro.  As his fame began to grow, Andy joined the cast of Taxi, made appearances at professional wrestling events, masqueraded as an abrasive lounge singer, and basically showcased his unique style to the world, making him an unforgettable icon.

Whether or not you enjoyed Andy Kaufman’s sense of humor, you can take something away from this film.  It’s about more than a review of his acts, it’s about the man himself; his quest to be heard, his desire to entertain audiences in ways they had never experienced before, and his totally crazy life that is almost impossible not to laugh at.  Kaufman was an original in every sense of the word, and people like that are hard to find.  Now, as far as the movie goes, luckily that was entertaining too.  Carrey as Kaufman was perfection from the very beginning.  DeVito as Shapiro was almost hard to watch emotionally, because here is a man who knew Andy well in real life and got to see all of his ups and downs.  Usually I don’t enjoy cameos, but this movie was full of the people that were actually a part of Andy’s interesting life story: his cast mates from Taxi, the real George Shapiro, Jerry “The King” Lawler, Lorne Michaels, and so many others.  It made the film honest and real in a way that you don’t see very often.  I came away wanting more, wanting to know all about Andy Kaufman and what made him tick, wanting to be a part of his never-ending practical jokes.  And who knows, maybe we all are right now and we just don’t know it.