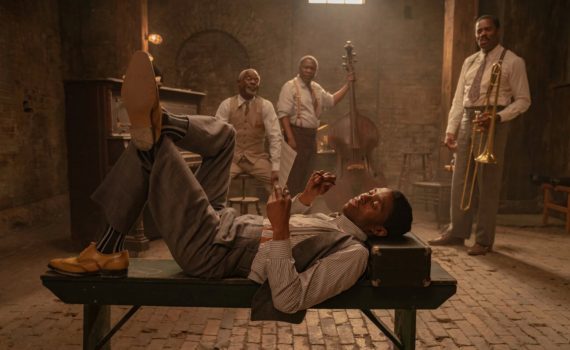 I finally watched Ma Rainey, and all I have to say is “I told you so.”  I promise that my quick judgements are often proven wrong, that I am more than capable of admitting that a trailer struck me wrong or that a doubt took control or that I simply didn’t know what I was talking about; I sometimes quickly predict what I’ll think about a film, that’s not great, but I, at the very least, am happy to change my mind.  Ma Rainey didn’t force me to do that; I knew it was going to be a limp dish rag of an adaptation when I first caught a glimpse of it, and that’s exactly what it turned out to be, regardless of the airy opinions of critics who were simply ready to rave.

Based on the play of the same name, this is the story of Ma Rainey, but also of Black artists during the blues and jazz boom after the turn of the century, of the explotation of Black performers by their white neighbors who, all the while, preached equality.  During a recording session where Ma is to make a career-defining album, we meet her band: Toledo the old piano player, Slow Drag on bass, Cutler the band leader, and Levee, a horn player who’s young, arrogant, but full of life and skill.  He struggles with the bonds of being in the band, of being a Black man in a white man’s world, and of being told what to do when his own dreams and visions are busting at the seems.

Wolfe is barely a film director, Ma Rainey is barely a film, and there’s no wonder all went wrong while trying to force this play to life.  Like electrocuting Frankenstein’s monster alive and expecting it to be chipper, it’s your own damn fault that this isn’t a movie that flows well, that feels right, and that audiences can adore; it’s just not a movie, period.  This is stage play, and while that works on the big screen on occasion, it’s very difficult to pull off, which is why you need talent stacked on talent stacked on talent, and most of the time that’s still not enough.  It wasn’t enough that Boseman was awesome; he was made static by the box in which he was acting.  It wasn’t enough that Davis was grand; she was barely in the thing, didn’t sing, and looked weird.  And it wasn’t enough that the action was frantic; multiple times that action turned into melodrama, or even unbelievable farce, and that’s simply bad cinema.  Ma Rainey isn’t a musical, it isn’t theatre, and it isn’t a true story; it’s a messy bit of too much earth, somehow still without enough to stand on.