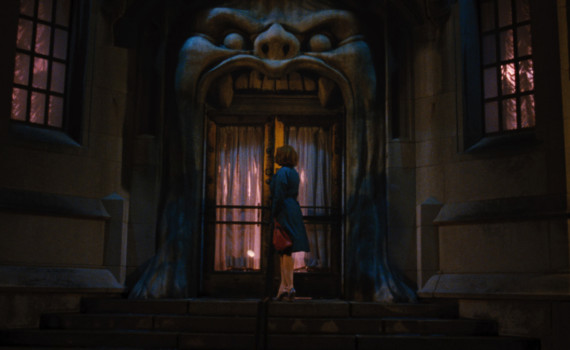 Ryan Gosling makes his directing & writing debut in Lost River, a film that will deservedly be labeled as an extravagance of a bored millionaire rather than the work of a brilliant mind.  Gosling’s acting credentials are unparalleled and have solidified him as a Hollywood megastar: The Notebook, Half Nelson, Blue Valentine, Lars and the Real Girl, Drive, The Place Beyond the Pines, Gangster Squad.  But his career as a writer/director will be short-lived if this is all he has to offer.  Lost River is a collection of strange ideas, a brain-storming of what-if-we-dids, not a solid film cleverly made.  It’s one of the weirdest things you’ll see this decade, without the talent & hard work behind it to carry it through to the climax.  A conceit rather than a necessity, this movie is guaranteed to disappoint.

In a nearly abandoned city in what might be an alternate future, the rules of society have broken down to the point of disintegration.  Houses stand vacant, law is minimal, thugs rule the neighborhoods, the banks evict who they choose, and people survive as they will.  For Bones, this means stealing copper piping from houses controlled by Bully, the young area kingpin/psychopath.  Bones’ mother, Billy, makes money at a unique club that caters to the need to enjoy violence in a safe environment.  And Bones’ friend, Rat, keeps her catatonic grandmother alive in a dilapidated house, telling stories of an underwater town and the curse placed upon the city that destroyed it.  These characters will attempt to live their pitiful lives as best they can, while death & darkness lurk around every corner.

I guess this is dystopian fiction in an odd way, giving us an undetermined place & time in which normal structure has begun to collapse.  And there are some messages here, some metaphors about our world: the banks, the foreclosures, the criminals, the clubs, the family trying to survive.  But it’s all so shallow, so underdeveloped, that it won’t impress you with its attempt at deep currents.  There just isn’t enough to grab on to, as if Gosling had a bunch of interesting ideas, threw them all together, and didn’t have to ask anyone for money or permission to make them into an unlikeable movie.  The acting was fine in its own way, with solid performances from Hendricks, Mendelsohn, Saoirse Ronan, and Matt Smith, but the film as a whole was way to weird without any relief.  Perhaps Gosling will try again, but hopefully with a little more form and editing, producing a film that can be appreciated instead of trivialized.