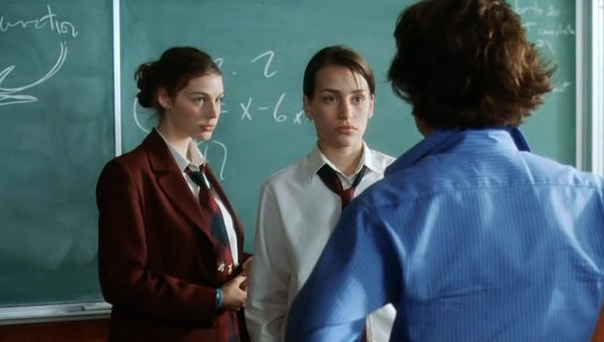 Lost and Delirious is a rating roller coaster if ever there was one; up one minute, down the next, anywhere from 2/10 to 9/10 at any given moment, and you’ll have to wait until the final over-dramatic scene to make you decision on just how much you hate this movie.  Really, there were spots when I caught myself thinking, “Wait, is this actually good?!”, only to reassure myself after with, “Oh no, right, worst film ever.”  Written by a Canadian, directed by the Swiss, brought to American audiences, with music from Ani Difranco; perhaps it was a case of too many cooks in the kitchen, and not enough smart decisions by anyone involved, as the plot reached the top of the track, headed down, and promptly derailed.

Mary, nicknamed Mouse for her shy nature, has just been enrolled in a boarding school, following the death of her kind mother.  She feels alone and unwanted, but luckily rooms with two other girls who are both full of life, and have similarly difficult back stories.  Tori’s family is far too perfect, she constantly feels pressured to stay on the “right path”, and Paulie is adopted, desperate to reconnect with her birth mother and find her true self.  But both girls have a secret that Mary soon finds out; they are sleeping together.  It’s not just a crush, not experimentation, they are in love, and Paulie is passionate about staying together forever.  Tori isn’t so sure, she knows what’s expected from her next; marriage, kids, tradition.  And so begins a school year full of heartbreak and betrayal, with Mary caught in the middle of it all, and witness to what comes next.

A mix of Dead Poets Society, Cruel Intentions, and …lesbians? …, Lost and Delirious is a snapshot of the times, but through a very odd lens, one that was in perfect focus at rare moments and completely covered in fog the rest of the time.  The story is sometimes poignant but mostly silly, as if it was in the wrong hands from the beginning and was constantly being dropped, only to be picked up by someone with a completely different vision.  The music was terrible, just awful, and not even 90s nostalgia will keep you from noticing all that’s going wrong in any given scene.  The acting wasn’t too horrendous; Barton was sweet, Perabo was intense, and my god was Paré hot.  But no one was good enough to carry things when they got kooky, and boy did they get kooky.  I liked the struggle-against-the-taboo angle, there were some solid seconds, but mostly the quality trended downward, and only got worse & worse the more you sat through.