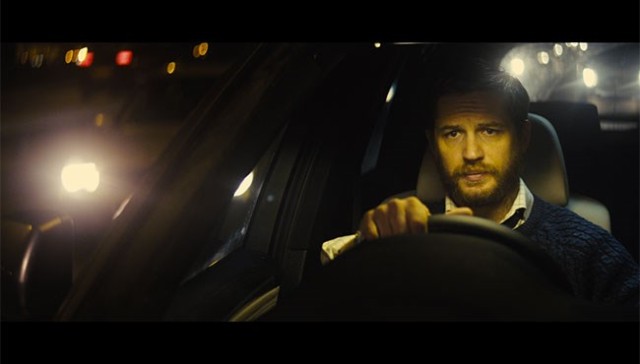 Tom Hardy is a force to be reckoned with.  Since 2010, this English actor has emerged as a new star, but in a way that feels as if he’s been a veteran presence for years.  In 201o he made his mark on American cinema with a role in Christopher Nolan’s hit film Inception.  In 2011 it was Tinker Tailor Soldier Spy and Warrior, an extremely underrated and gritty film.  Then came The Dark Knight Rises and The Drop, two mainstreamers that got a lot of attention.  But although it may have flown a bit more under the radar, Locke is a film that shouldn’t be ignored.  It lacks the thrills and excitement of Hardy’s other movies, but showcases his talent more than any of the others, allowing him to prove that he’s not just a tough guy but a fine actor who, right now, can do no wrong.

Ivan Locke is the definition of a stand-up guy.  A wife, two sons, a good job, trusted everywhere he goes; Locke has yet to make a major mistake in his life.  He’s a construction manager, taking great pride in perfecting the details, knowing the concrete, making sure each of his sites is built with the finest care, making buildings that will last centuries.  And so it comes as a surprise to everyone in his life when Ivan leaves a job site right before the largest concrete pour in the history of Europe.  He drives away without an explanation, toward a duty he feels that he must see to in London.  With only his thoughts and a car phone for company, Locke attempts to make sense out of the decision that he has made, calling those closest to him in an attempt to explain his rationale.  On this long drive, we ride as passengers, slowly beginning to understand the story, and the man telling it.

Almost the entirety of the movie is set within Locke’s car.  We see only him; everyone else is a voice in his car’s speaker system.  He drives for hours, talking and attempting to explain his irrational behavior, and we begin to get bits & pieces of this complicated plot.  It’s a role that demands a great actor, and Tom Hardy delivers.  It’s just him, there’s no one to help carry the film, and Hardy supports what quickly becomes a very heavy story and a very complex character.  There’s no action, no hostage negotiations over the phone, no police chases; this isn’t that kind of movie.  It’s a cerebral and challenging film, one that you better feel invested in fairly quickly if you are to have any chance at enjoying.  Luckily, I bought in.  Hardy won me over with his portrayal of Locke and I believed him in every scene.  I wanted to know the how & why of the plot, even knowing that I wasn’t going to be watching twists & turns.  The story is straight-forward, mirroring Locke himself, and Hardy plays it perfectly, making this a solid film, if not one that will blow you away.

I agree, Hardy is excellent.