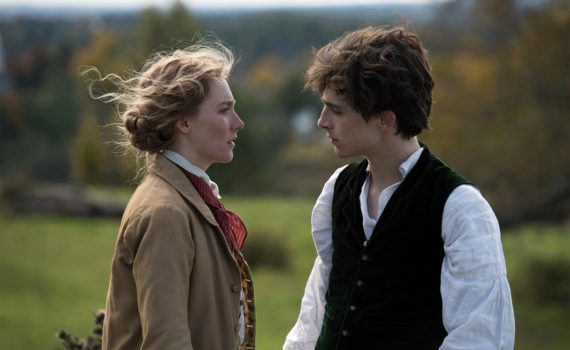 I was wrong about Little Women, and I couldn’t be happier to say it.  I thought we were on a collision course with disaster, a Christmas whatever-the-opposite-of-miracle-is, an overworked and sooner put to rest bit of trivium that didn’t have enough talent backing to make it anything more than thin syrup.  But I was wrong; god bless us, everyone.  Gerwig is an amateur director, Watson can’t really act, the novel is 150 years old, these girls are all 10 years older than the parts they’re playing; there were reasons to be skeptical, I stand by that, but I’m so glad to report that all those reasons went by the wayside.  Little Women is a grand celebration of life, love, and the sweet pain of growing up, presented to audiences with a special skill that comes only from adoration of the original work.  I will no longer doubt Greta when she sets her mind to create something magical, especially with Saoirse Like Inertia in tow; I think we have been blessed with the pairing of the century when it comes to those two amazing women, and we should just sit back and say “thank you”.

This is the story of the ups & downs of the March family, a rambunctious troupe from Massachusetts trying their best to live good lives during the war between the states, attempting to maneuver coming of age at a time when material wealth often seemed like all the mattered.  Father is off fighting, Mother lends a hand all around town, so that often leaves the four daughters alone to their own devices and imaginations, which sometimes leads them into trouble.  There’s Meg, the eldest, serious about finding a handsome match, but also a natural actress.  Jo, the tomboy, wants to be a writer, and can’t ever see herself getting married, as unheard of as that might be.  Beth, the musician, is the most level-headed of the family, and the sweetest, wanting everyone to stay together forever.  And then there’s Amy, the baby, who is beautiful, vain, fun, and sometimes foolish, but so very good at heart.  As they grow, they will go their separate ways, although often tied together by a boy (who many of them think they might love) named Laurie, who has long been a family friend.  No matter what happens, the four will always be sisters, will always be one family, and nothing on Earth can break that everlasting bond. I’ll say it one more time; I had doubts.  Gerwig still had some proving to do, even after Lady Bird, but she’s off the hook now, I won’t be doubting her again.  What she was able to accomplish here is nothing short of a coup, a stunning upset when I really did think she would fail.  She took the book and modernized it somehow, someway, while still keeping it set in the 1860s; I’m really not sure how she did that.  But she made the story relevant to today’s conversation, she changed just enough to make the plot about young women now, and she figured out the age bumps too; Amy is supposed to be 12, while the actress playing her is 23, so that could be weird, but Gerwig wove the 2-part story into one narrative, and created personas that were timeless, making the details almost moot.  With incredible music flowing throughout, the pieces of the puzzle of their lives connected one by one until audiences began to see the bigger picture, and the more we saw the more we were ensnared by the passion of these young women, their love for one another, and their zest for lives that not only burst the mold, but forged a clear path for all those who might come after.

Now we come to acting, which could not have been more important because, as with many period films, sure the costumes and locales are important, but most of the “action” happens within conversations and/or dramatic showdowns on the moors, so the actors had better be spot on with each and ever line or the center will not hold.  In not-so-shocking news, since Saoirse Ronan was on-set, things went rather well.  She has become a force of nature, and I can’t wait to see what she can do each time I hear she’s starring in another project.  She is the unquestionable lead, never falters under the weight, and carries the story to the finish line flawlessly, all while magnificently hiding an Irish accent that’s almost a caricature.  Not to be outdone, Timothee Chalamet, who performs with such a pompous ease that we never question his right to be wherever he wants to be; I think that’s called “command”.  And not to forget Florence Pugh, who may be having the most extravagant coming out in cinematic history (Lady Macbeth, Outlaw King, Midsommar), and who is insanely lovable, attractive, and smooth.  The rest of the cast was a mixed bag: Eliza Scalen was completely forgettable as Beth, Laura Dern & Bob Odenkirk were AWFUL as the parents, Tracey Letts is always a consummate professional, Louis Garrel was a nice addition, Chris Cooper was a nice nod, and I guess Meryl Streep was fine, though unneeded.  The biggest surprise is that Emma Watson wasn’t terrible, she was simply mediocre, which is a step in the right direction for her, if you want to think positivity.  Honestly, there aren’t many negatives to point at, other than a few performances that I think could have gone better; the film, taken as a whole, was lovely and loving, no one mistake marring what was ultimately a surprisingly moving motion picture.