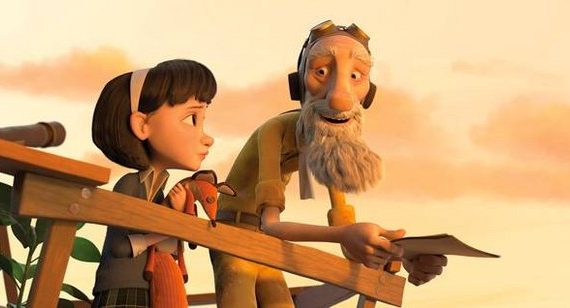 As popular as The Little Prince book has become, as high as it tops so many literary lists, it’s something I missed during my childhood and so never grew up loving.  I did read it to my kids last year, enjoyed it as a quick & poetic way to spend a few evenings, but couldn’t quite understand what all the fuss was about.  It has so much to say in so little time that it becomes overwhelming, not enchanting, when sticking to one or two themes would have benefited the book in so many ways.  Enter a Netflix Original movie version that attempts to pare down the content, focus it on a central idea, bring us some lovely animated, and send audiences & children off to bed happy.  In many ways it succeeds, but I just don’t think this story will ever be one of my favorites.

Based on the 4th bestselling book of all time, this newest version of the classic story presents a tale within a tale.  A young girl and her hyper-organized mother spend the summer scheduling out the girl’s entire life, hour by hour, day by day, year by year.  Being efficient, effective, and essential are all that matter to this joyless family, until the day the young girl meets her next door neighbor.  Known as the Aviator, this eccentric old man is the exact opposite of the girl’s mother, and a ton of fun.  But although their friendship grows quickly, the Aviator imparts upon her the knowledge that nothing lasts forever, that people leave.  He tells her a story through a series of pages & drawings, the adventure of the Little Prince, a boy who taught the Aviator all he knows & loves about life.

A step up from the book (though I’m sure that’s sacrilege to a lot of people), the movie is still not perfect.  I guess I wanted it to be strange & magnificent in the way that I’ve come to expect from Studio Ghibli, not kind of strange and a little tedious in the way Netflix delivered it.  I was bored by the end and I’ll just never love this story & its characters, but I won’t say it was all bad either.  The girl was voiced by Murph from Interstellar, the Aviator by Jeff Bridges, and they were both fantastic.  The supporting cast was pretty cool too, at least by name: McAdams, Paul Rudd, Marion Cotillard, James Franco, Benicio Del Toro, Ricky Gervais, Paul Giamatti, Albert Brooks.  And the movie focused in on death & growing up as central themes, condensing the book into an original story with flashes of the classic element as needed.  In that way, the duel animation worked and the delivery of the source material went smoothly.  If you grew up with the book as a companion I can’t predict how you’ll react to Netflix redoing it; there’s a strong chance you’ll hate what you see.  For those of you like me, give it a shot; it looks great, has a nice base, and some clear messages to share, just don’t expect Inside Out.