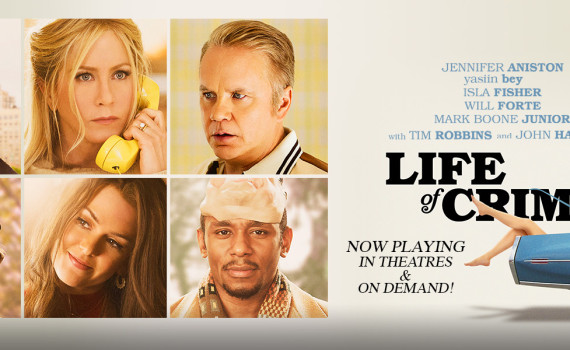 The first thing you need to know is that this is an Elmore Leonard movie.  If you don’t know much about him, he’s the author of many a twisted, funny, fast-paced, crime tale and Hollywood just loves making his books into films.  Get Shorty, Jackie Brown, Out of Sight, The Big Bounce, Be Cool, 3:10 to Yuma; all Leonard stories turned into movies and all pretty well known.  Jackie Brown is probably the most famous, thanks to killer direction from Quentin Tarantino, but they all have a lot in common and when you hear Elmore Leonard’s name you should know what you’re about to get.  Life of Crime is the latest, and it shares more with The Big Bounce than it does with Jackie Brown, becoming more of a light-hearted romp than a case of cold killers, entertaining for 90 minutes without making a ton of impact.

It’s complicated, so try to keep up.  Mickey is married to Frank, an asshole real estate guy who’s rich, dishonest, and usually drunk.  He’s having an affair with Melanie down in the Bahamas where he does all his sneaky business.  Mickey is considering an affair with Marshall, a nice guy who isn’t too bright.  But watching from the outside are Louis, Ordell, & Richard, a trio of bungling criminals and would-be kidnappers.  They abduct Mickey from her home, knock out Marshall in the process, and blackmail Frank with inside knowledge of his back dealings, and, oh yeah, they have his wife.  But unluckily for the crooks, Frank wants a divorce, so what does he care if they snip off a couple pretty fingers if they don’t get his money?  Nothing goes according to plan, of course, and no one really knows what they or anyone else is doing.

While Jackie Brown was a little darker, Life of Crime has a lot of the same attributes; the retro setting, the crime caper, tons of characters, and even one named Ordell Robbie, who I can only assume is the same dude.  Samuel L. Jackson played him before, Mos Def plays him here, and I’ve got to say, he might have stolen the show.  Although, each actor really gave everything they had to their extremely odd characters, which is what ultimately made the movie work.  It was funny, weird, easy to watch, short, never confusing, and always ridiculously inept, creating a cast that you root for regardless of how screwed up they are.  This is a film that takes no effort on your part, entertains throughout, and ends quickly.  Watch with confidence, but expect a little off-beat humor, similar to the Coen Brothers, but without any real darkness or violence.  If you’ve seen The Big Bounce, this one is a little more serious, a little stronger developed, and a good deal better.