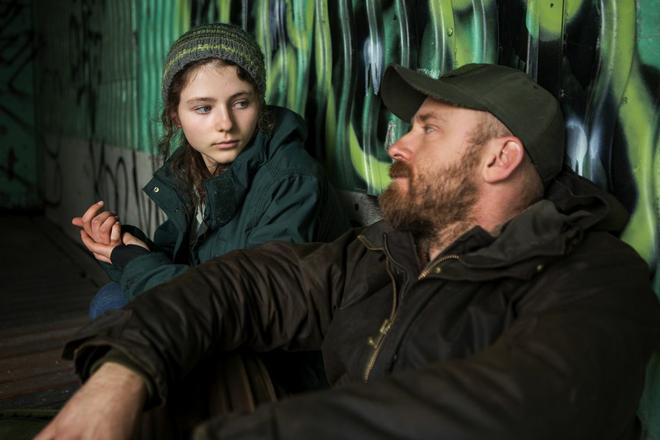 Director Debra Granik’s latest film will inevitably be compared to her biggest, and I don’t think that’s unfair.  Winter’s Bone wasn’t her first feature, it was her second, but it put her on the map and made Jennifer Lawrence into a star, so it was a pretty big deal.  Granik then waited 8 years to direct another drama, and she made it about a teenager who must deal with her father’s problems while surviving her family’s poverty.  That’s pretty much the same plot, minus the crime element, keeping Dale Dickey, who appeared in both films.  Anyway, my point is that Leave No Trace will be compared to Winter’s Bone, and it will live or die by that comparison.  But I think that’s fair, unless the only options are “better” and “terrible”.  Because this film isn’t better, but it also isn’t bad at all, its largest flaw being its inability to live up to its predecessor.

Will is a Veteran with PTSD who was never able to return to his former life, choosing instead to stay off the grid in the woods of Oregon where his dreams might have a harder time finding him.  His only companion is his daughter Tom, a girl he raised and taught to read and shared his knowledge of survival with, his only partner in life.  When Will and Tom are discovered illegally living on state property, they are forced to adapt to modern living; jobs, schools, bungalows, forms to fill out, decisions to make.  Will simply can’t do it, he isn’t ready, but Tom wants to try to lead a “normal” life for once, to make friends, to have a future.  Running away again might mean that they never come back, which isn’t a path that Tom wants to travel.

In theory, this is Thom McKenzie’s breakout role like it was Jennifer Lawrence’s, and there’s a chance that is might really be.  In this heavy character drama, she carries her weight, and her voice is very captivating, she’s got a quality that draws you in.  The part was written very well too; I don’t know Granik’s backstory, but she seems to be creating these stories from deep places, and they come across as very honest.  Ben Foster is great too; man, he’s great every time.  He’s one of the most underrated actors in cinematic history; the guy can do anything.  Compared to Winter’s Bone, Leave No Trace isn’t AS impacting, isn’t AS powerful, so I can’t rate it as highly since it’s very similar in a lot of ways.  But completely on its own, it’s still a fine film, a really riveting narrative, and you should definitely see it because it will at least be in deeper discussions come awards time next year.