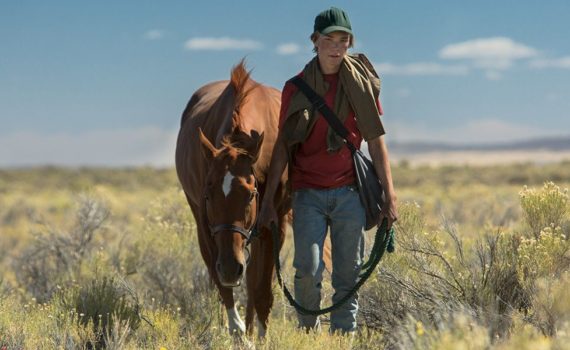 Director Andrew Haigh’s last film was 45 Years, which was incredible, so it’s no surprise that Lean on Pete is more than solid as well.  Haigh adapted both movies for the screen, one from a short story and one from a novel, so he’s talented in that area too; some people can just do it all.  His focus seems to be on strong emotion lurking just behind every day interactions, how moments might look small until they’re placed brick-like along a path that leads to a place you never thought you’d end up.  The stories he chooses are heavy and dramatic, but they speak clearly to audiences, allowing us to see ourselves in the characters even if our lives haven’t gone down the same road.  Lean on Pete is powerful in this way, taking us on a journey step by step until we can’t turn back; like the fabled frog in the water turned to boil, we don’t know what’s in store for us until it’s too late.

From Spokane, Washington but now living in Portland, Oregon, Charlie is a good kid who only longs for the simple things: friends at school, a place on the football team, time with his dad, a house without roaches, three square meals, and room to run.  One summer, Charlie comes across a Racino called Portland Downs; a house racing track and a casino all in one.  He doesn’t know the first thing about horses, but he gets a job helping out a grumpy owner named Del who needs a hand loading horses, driving them around, racing them, and bedding them down in their stables.  One particular horse, Pete, stands out to Charlie, and he develops feelings for the quarter horse, despite frequent warnings that these animals aren’t pets.  When Pete approaches his time to be put down, Charlie, who can’t lose another creature who he loves, runs away with the horse, going cross country to find a long lost aunt who represents all that is possible in his life, all that is good, all that he’s never had.

On the surface, Lean of Pete is a story about a horse and his boy, as it were, but there’s much more than that going on below the surface, which is another favorite pastime of Haigh’s, pulling the rug out from under us when he can tell that we’re at our most emotionally unsteady.  The plot begins by focusing on Charlie and his dad, then it moves to Charlie and his horse, and then it moves again, this time to Charlie’s rock bottom, as we walk beside him through his darkness.  Heavy stuff, so don’t simply expect a heart-warming tale of friendship, there’s much more sadness to be experienced here than you might expect.  Plummer does an incredible job shouldering the weight, never setting it down for a moment to breathe, always forcing audiences to keep pace.  And there are some really nice cameos scattered throughout as Charlie meets people all over the country on his adventure: Steve Buscemi, Chloe Sevigny, Steve Zahn.  Cameos can go one of two ways, but they worked in this film, and it seemed that every choice worked out for Lean on Pete.  The landscape was stunning, the quiet moments really spoke loudly, I was invested from the very beginning, and the ending wrapped the story up nicely, when so often climaxes can let us down so hard.  This movie was a rare success and deserves to fly higher than its path under the radar.