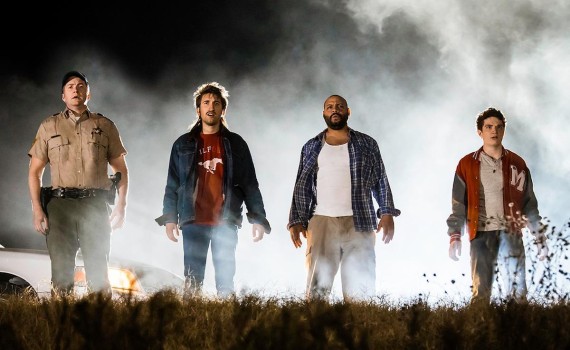 After watching the trailer, I thought Lazer Team had the chance to be the under-the-radar comedy of the year.  It looked funny, refreshing, like an odd mix of a dozen movies, but in a way that would poke fun of its own genre.  It looked good, basically, but sometimes trailers can be misleading.  Such is the case here, since the actual film that followed was exactly the opposite of what I was hoping for.  I don’t think I laughed once during this movie.  I’m not even sure I cracked a smile.  The humor was so shallow as to almost be unrecognizable as humor, disappointing me in every way I could be disappointed.  If you, like me, were looking forward to a strange mix of styles here with the end result being a surprisingly wonderful comedy, prepare to be let down.

Four losers stumble upon the greatest event in human history, and are almost guaranteed to screw it up.  Hagan is a local cop, a depressed & downtrodden chump who will never leave his hometown and will never live down his poor high school legacy.  Herman was a promising athlete, but is now an incorrigible drunk who has no respect for the law.  Zach is a teenage wasteland, Woody a blazing idiot, but the quartet are about to become more important than they ever could have dreamed.  They are, accidentally, the first on the scene of an alien spacecraft landing, which was meant as a gift to humanity.  See, evil aliens are coming, they want to fight a champion for the fate of Earth, and a special power suit has been supplied.  Only, these guys weren’t meant to wear it.

Dumb, dumb, dumb.  I really didn’t laugh, not once, and I could not have been more disappointed by that fact.  I was looking for a more off-beat The Watch, a funnier Pixels, a goofy Tron.  What I got was puke jokes, poop jokes, penis jokes, and the list goes on.  The humor could not have been more juvenile or simple, comedy that any dorm room moron could have come up with on a random Thursday at 3am.  But even stupid humor of that caliber could at least have been tolerable were it to come from actors who were naturally funny.  But none of those were available for this film, apparently.  If you have the misfortune of watching Lazer Team, you will see some of the worst actors ever put on screen, the dumbest concepts, the most unoriginal material, and you will curse yourself after 90 minutes of wasted life.