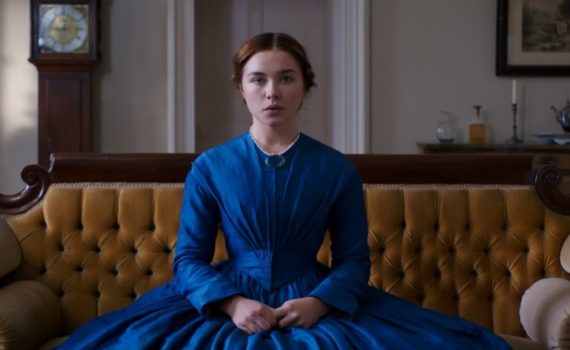 Combining a director, writer, and actress, none of who have directed, written, or acted before, sounds on the surface to be a completely insane and awful idea.  Oldroyd had never filmed a feature, Birch had never written a script for the screen, and Pugh had only two tiny movies under her belt, and yet they came together to adapt a 150-year-old Russian novel for modern audiences; that’s either bravery or stupidity.  But the story caught eyes, the style seemed unique, and expectations were heightened beyond the point that they should have safely gone.  This film was doomed by the amateurs in charge and by the exposure it now might wish it had never received; it would have been a nice, indie surprise if critics had stumbled upon in partially unawares, but as it stands, Lady Macbeth is only passably good.

Katherine is purchased along with a piece of land by an English nobleman and wedded to his son, beginning a loveless marriage between a beautiful young woman and an older man who wants nothing to do with her.  She is kept to the house like a pet, never allowed to walk the grounds or even crack a window.  Her lifeless existence is unbearable, until her husband and father-in-law leave the countryside for London, gone for an undetermined but rather long time.  Katherine beings a romantic affair with a groom named Sebastian, an unpolished and attractively spirited man who fills her desire for sex, companionship, and love.  But the men of the household will return someday, and the price of temporary freedom will have to be paid.

It’s a classic Jane Eyre-style setup, only the novel was set in Russia, while the movie is placed on the familiar moors of wild England.  The young bride, the rough husband, the cold house, the passion waiting to erupt when the cat’s away; you understand the formula, and Lady Macbeth sticks to it rather well.  But it takes a darker, more brutal turn, and that’s where it differs from others in its genre.  I’ve seen it called ‘Wuthering Heights directed by Alfred Hitchcock’, and that’s as good a description as any, a period piece with a deadly twist.  That’s to its credit, but unfortunately no one involved was quite good enough to take it to the level it needed to reach in order to be something memorable.  The acting is strong, some of the shots are excellent, a little sex and murder mixed in for good measure.  But apart from one particularly stomach-churning scene toward the end, not much will stick with audiences after the final credits roll.  It’s a fine but not remarkable film, a strong attempt but not something backed with enough talent to make it stand out.  Let’s see what else this cast & crew can do in the future; I’m betting they have more to offer.