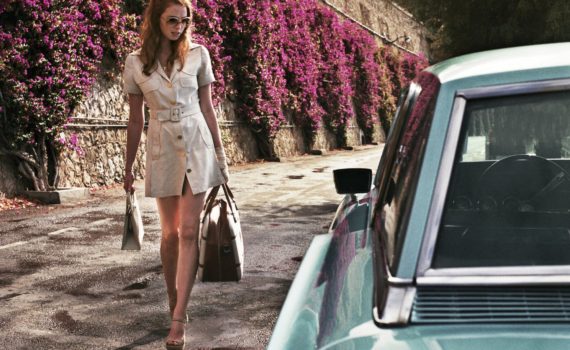 A French film noir featuring one of the most attractive women you will ever have the pleasure of seeing on-screen; not the worst way to begin a film, but also not a guarantee of success.  The Lady in the Car with Glasses and a Gun is not only one of the longer non-subtitled titles you’ll ever come across, but it also fits my former description to a tee, a movie that uses simple ploys to get our attention but then can’t seal the deal.  The French Riviera, an American muscle car, a devastating redhead, a murder, a betrayal, a mystery; ‘check’ ad nauseam, but those ingredients still need to be put together to form something delicious, they won’t do it on their own.  Left to its incapable devices, the film meandered often and never quite lived up to the appeal of its plot or the beauty of its star, more’s the pity.

Timid secretary Dany has never been to the sea.  Actually, she’s never done anything remotely exciting or dangerous, a fact that is soon to change.  Her boss, the sexy, masculine, domineering Michel, puts in a special request.  He needs her to come over to his house to work on an important presentation while he & his wife go out for the night.  The next morning, he needs her to drive their car back from the airport after the couple leave on a trip.  Perhaps pushed a bit too far, Dany takes the cool car for a joy ride instead of straight home, beginning a series of bizarre events that she can’t explain.  Locals in the south have seen her before, remember things Dany herself does not, are acting like she’s taken this path before, which is quite impossible.  But when a dead man appears in her trunk, the situation goes from strange to indescribable in the blink of an eye.

It can’t be just me, and I’ll try to stay professional, but Freya Mavor is insanely hot.  She’s one of the hottest actresses I have ever watched, and the director knew many of us would feel exactly that way.  Each scene seems crafted to expose just a touch of mile-long leg, just a hint of the temptress hidden beneath a mild-mannered exterior, things getting a little more heated as time goes by until we are shown the whole package in a pretty racy sex scene.  I mention this in detail because it’s quite a highlight, and smartly done, the rest of the film paling in comparison.  The noir vibe grows tiresome, the mood begins to feel redundant, and at some point I assume you, as I did, will stop caring how the story ends.  There’s too much tease and not enough substance, a weak plot hidden under suave surroundings & one fine dame.