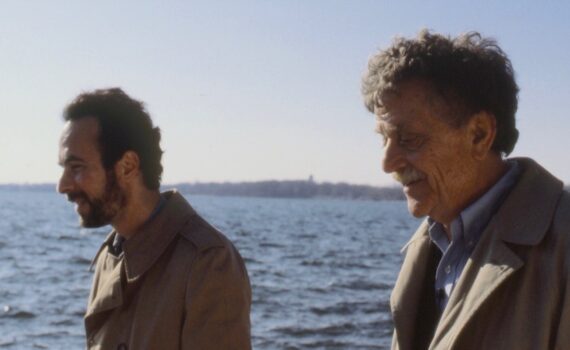 If you have ever loved a Kurt Vonnegut book, you would be doing yourself a disservice not seeing this film.  Unstuck in Time is the definitive documentary of his life and works, created by a director who became a friend over the course of a quarter century.  Weide would idolize this author, come to know him, come to love him, watch him pass, and then release what amounts to the story of his life; this is the movie that captures the man, at least, however much his mind could ever be captured by mere mortals.

Bob Weide was a high school student who created his own Kurt Vonnegut class to teach, with permission from the school, that’s how much he admired the author and adored his books.  The 60s was the time of Kurt; he spoke to young people in a way no one else could, he wrote to their astonishments, and to their greatest fears.  When Slaughterhouse Five was released in the midst of the Vietnam War, Vonnegut would become a cult hero, a literary celebrity, and would ultimately be understood as a genius of the time.  This is the story of his life as told by a man who became his great friend, with no stone left unturned, and with a cheeky wink to the death that awaits us all.

Weide compiled these interviews, these clips, these images, these moments, over the course of 25 years, and didn’t release the film until many years after Kurt’s death.  What started as a simple documentary became a chronicle or monument, a great honor and capturing of an author who was larger than life.  Vonnegut’s novels touched so many of us: Player Piano, Sirens of Titan, Mother Night, Cat’s Cradle, Mr. Rosewater, Slaughterhouse Five, Breakfast of Champions, Galapagos, Bluebeard, Timequake, and many more short stories, collections, and speeches.  His genius cannot be overstated, his ability to meld humor with philosophy, to show us the certainty of death but also the hilarity of life.  With touching sentiment, his good friend unfolds his life for us to view, and his works for us to understand, allowing an access that we definitively don’t deserve, but will always greatly appreciate.