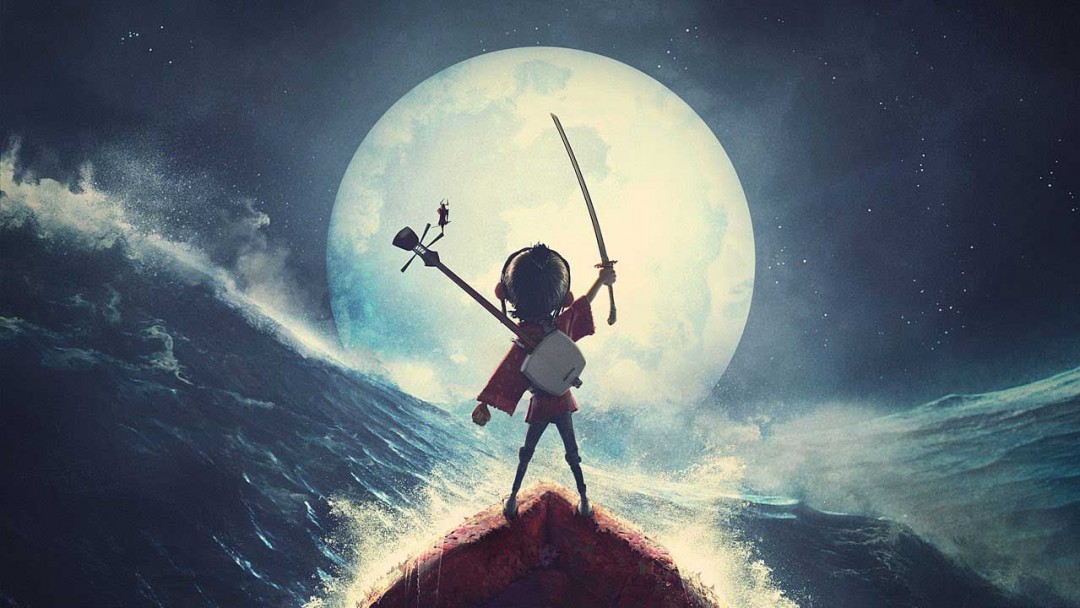 Among the best animated films of 2016, and most likely among the Oscar nominees for that category as well, is Kubo, a Laika production that should awe most audiences, entertain most children, and impress most adults.  Laika is a stop-motion animation company with films to their credit like Coraline and The Boxtrolls, movies whose base stories are cool enough, but also have the added magic of some of the most eye-popping imagery you will ever see on screen.  Not only is the artistic vision at the foundation of the company something worth our respect, but the detailed work behind the scenes is something that is almost hard to accept.  Stop-motion animation has made a resurgence, is well-represented here, and Kubo could win awards by the piles this year.

Young Kubo lives with his mother high atop a cliff overlooking the sea on one side and a tiny village on the other.  He & his mother came ashore in a small boat, escaping some fabled evil that wants Kubo for its own.  Where the line between reality and the stories his mother weaves is drawn, Kubo isn’t quite sure, as she grows more & more distant from this world with every passing day.  Kubo makes a living for the family by telling stories, using the magic of his guitar to bring his origami to life.  But he has much more untapped power, and the evil that wanted him as a baby is still searching.  Kubo will have to leave his home to begin a quest for the ancient armor of his father, magical items that are his only protection from the Moon King and his terrifying minions.

If you’ve seen other Laika movies you know what to expect; dark, morbid, fascinating storylines woven around incredibly time-consuming & painstakingly-crafted animation.  That’s Kubo to a tee, a twisted story that adults can enjoy, lovable characters that kids will remember, all physically moved inch by inch for our entertainment.  It’s more than impressive what this company can create, and I’m willing to watch anything they produce; they haven’t let me down yet.  This film is almost a combination of Laika and Ghibli, the two greatest non-juvenile animators out there, pulling together something that feels like Coraline mixed with Ponyo, a funny, heartwarming, scary plot with amazing visuals and a touch of The Book of Life for good measure.  I don’t mean to suggest that Kubo is borrowing too heavily from others; on the contrary, it’s wonderfully original.  But it has a comfortable vibe that makes you feel safe, even while scaring your pants off with vicious villains.  The kid Parkinson is wonderful, Theron was perhaps the weakest point, but McConaughey is terrifically humorous, combining for a solid cast that do this film justice.  Kubo is something you think about the next day, not another Disney princess film, and for that alone it earns my applause.