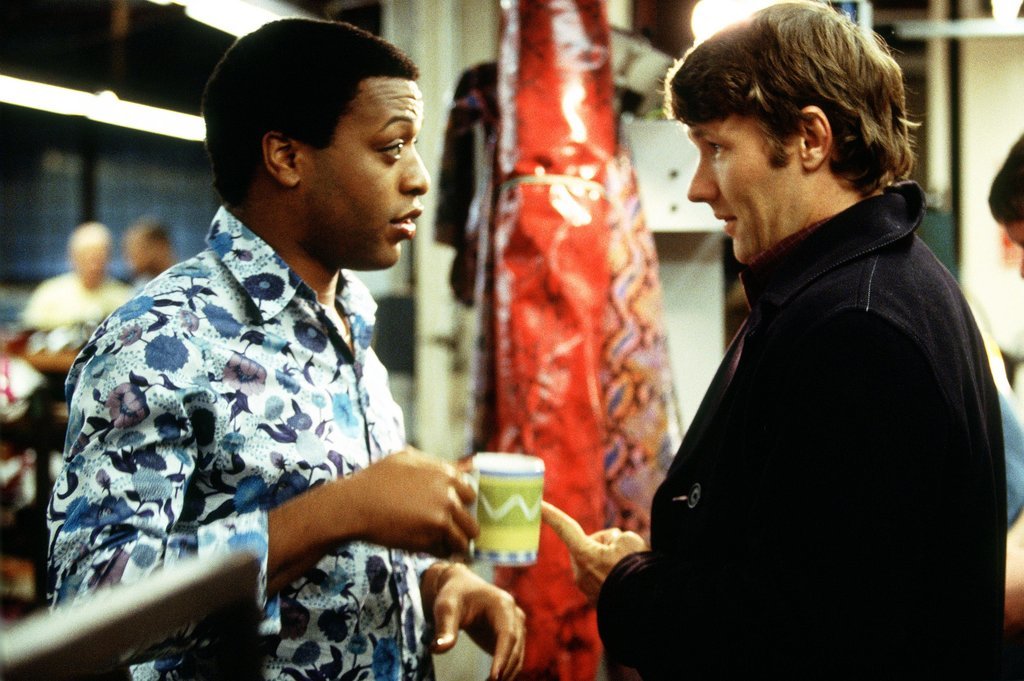 Before they were super stars, Edgerton & Ejiofor teamed up in the British comedy Kinky Boots, which would later be adapted into the smash Broadway musical.  Watching the movie, you can definitely see how it was an obvious candidate for a theatrical adaptation; likeable characters, love stories, lessons learned, dance numbers, drag queens, you name it.  I actually thought the film was based on the play, having only heard the title and not knowing much else going in.  But, unfortunately, the story is much more suited to the stage than the screen, exemplified by the success of the Broadway show and the low ratings of the film.  The plot seems bottled up in this version, just waiting for some choreographer to fall in love with it and transform it into the brilliant, gay spectacle it was ready to become.  Too bad for me that I’ve only seen the movie though, cause while it’s adaptable, it isn’t very good.

Young Charlie Price is about to start a new life in London with his fiancée, far away from his father’s influence, his Northampton upbringing, and the shoe factory that was supposed to be his life as it was his father’s & his father’s before him.  But a death in the family quickly brings Charlie back, but to an industry that’s dying.  In order to revive the company and keep from firing an entire staff of dedicated employees, Charlie must look for a new market, new clientele for his shoes.  And oddly enough he finds it with the help of a cross-dressing lounge singer.  Lola knows what men want when they dress up as women, knows how uncomfortable their attire naturally is, and knows how to design a brand new style that will change foot fashion forever.  Charlie just has to convince a conservative town to accept an unconventional man before they all lose the things they hold the most dear.

The talent of these two lead men is unquestionable.  For Edgerton: Warrior, The Great Gatsby, Felony, Exodus, The Gift, Black Mass.  For Ejiofor: Love Actually, 12 Years a Slave, Z for Zachariah, The Martian.  These guys are true talents, relatively new, but here to stay.  When I found out they were in a film together before they got famous, that it was connected to a Broadway hit, that it had Brits & cross-dressers & grumpy factory workers; I don’t know about you, but that smells like success to me.  Except that it isn’t.  Chalk it up to inexperience, but both Edgerton & Ejiofor were weak and unlikable, failing to create real characters.  There was almost no music in the show, other than a few cheesy drag show numbers.  The repetition of the story and of the characters’ names (Charlie Price, Charlie Price, Charlie Price!) grew old quickly and only aided in my desire for the movie to end as quickly as possible.  Kinky Boots was a missed opportunity that someone saved by turning it into something new.  Find the play, go see it, but stay away from the film; it’s an amateur attempt at what someone has done much better since.