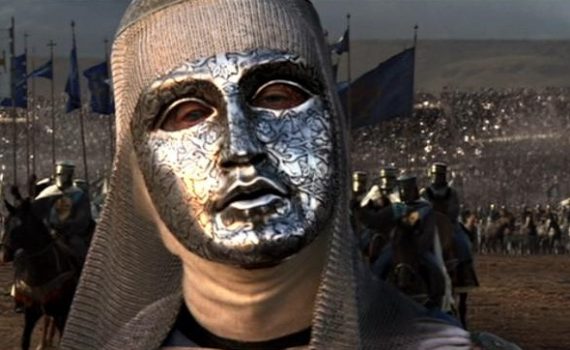 Kingdom of Heaven is not as good as we thought it was 15 years ago; it has aged badly since and can’t compare to others of its genre that didn’t suffer the same fate.  What was our obsession with Orlando Bloom anyway: Lord of the Rings, Black Hawk Down, Pirates of the Caribbean, Troy.  That’s almost completely his entire film career, at least what matters, and it’s sad that it came & went so quickly, from 2001-2005, the rest mostly more Pirates movies and Hobbit movies that didn’t require much beyond just showing up.  He’s a terrible actor, in hindsight, I don’t know why we were enamored with him, it makes very little sense, and it makes Kingdom of Heaven a weird movie to have enjoyed once upon a time.

In the 12th century, Europe waged war in the Middle East, as a hundred years of battles rolled over the region with one city at its heart; Jerusalem.  The Crusaders had come in swarms to conquer the Holy Land, and now a sort of fragile peace ruled the land, with King Baldwin on the throne and the mighty Saladin waiting impatiently in the desert.  Some wanted open warfare, like the Knights Templar, and tried to lure Saladin’s forces into conflict, but most wanted to live together, Christian, Jew, Muslim, all together sharing their most sacred landmarks.  A young man, Balian, the unknowing heir to knighthood and land near Jerusalem, finds himself traveling there to face his destiny, meeting the King and his sister, Princess Sibylla, and entering into politics that he doesn’t understand, ultimately becoming a potential savior of Christianity’s hold on the Kingdom of Heaven, but only if God wills it, and only if he can stay alive.

This story is spectacular, and probably should have led to a film that was easily Best Picture material, immediately on scale with Braveheart, Gladiator, and the like.  It’s broad, huge, sweeping, epic, amazing, and tells a true tale that’s so fascinating, the history of a place that’s still hotly contested to this day.  It’s one of those stories that takes history, plops an eye witness down in the middle, and let’s us experience the moment through his eyes, which is so fun and so much fun to watch.  The music, the armies, the costumes, the characters; this is grand theatre at its finest, at least as far as preparation was concerned.  The problem lies in Orlando Bloom, who is both no good and no good at being this specific leading man.  He seems out of place, so anachronistic, and never relates to the other actors, especially Eva Green, who he is supposed to love.  The other actors in the film are fantastic, including Green and Siddig, and gathering in the rest: Michael Sheen, David Thewlis, Liam Neeson, Kevin McKidd, Nikolaj Coster-Waldau, Martin Csokas, Brendan Gleeson, Jeremy Irons, Ed Norton, Ghassan Massoud.  It’s a phenomenal cast, the tale is spun nicely, but Bloom brings things down, and the entire feel starts to weigh a little heavy with cultural problems, religious nonsense, and perhaps simply a bit of out-of-touch film making.  Kingdom of Heaven isn’t quite as good as I remember it being when I was 22; now at 37, I see it a bit more cynically, much more critically, and its problems rise to the surface, which doesn’t stop it from being ‘awesome’ by definition, but stops it from being amazing by experience.