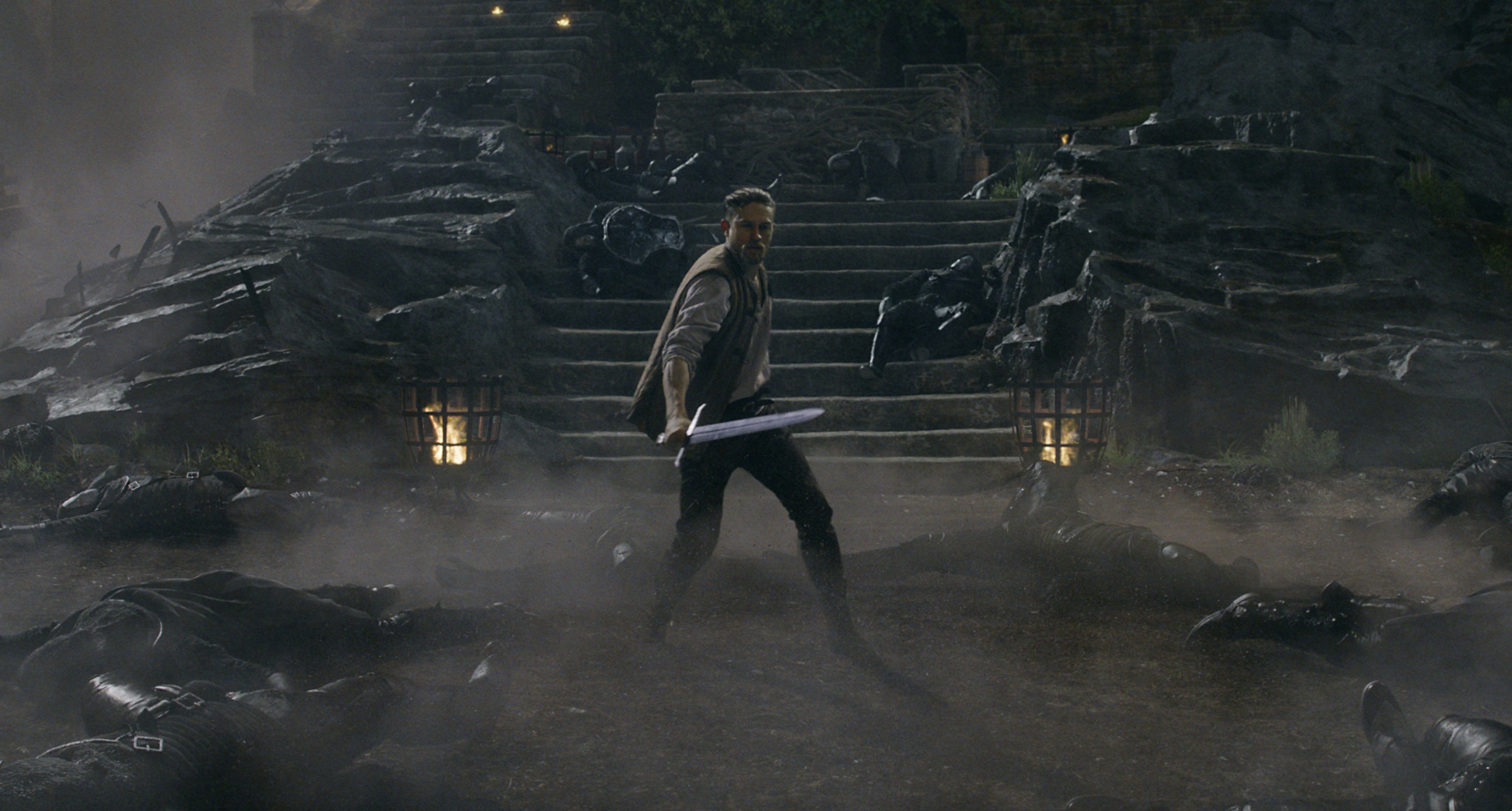 Guy Ritchie’s take on the Arthurian legend wasn’t welcomed with open arms, and I think I understand why.  I can only speak for Americans, but I think we view Camelot with a sense of awe, this mythical place that’s better than here, these heroic men who are greater than we could ever hope to be.  Basically, we put this story on a pedestal, treating it with near-Shakespearean gloves, and we don’t like it to be told too flippantly.  We’re tough critics when it comes to Arthur, even if it’s difficult to explain, and we dare each director who tries their hand to make a mistake, lest we roast them.  Trailers for Ritchie’s version appeared over-the-top, a rock & roll take that immediately rubbed us the wrong way or even caused anger in the more intense among our group.  But it still deserves a chance, which is why I sat down to watch it with an open mind, which is then how I came to enjoy it for the attempt it was, not for the perfection it wasn’t.

In a time of Man versus Mage, King Uther leads humanity against the magic that wants to destroy it.  Mankind and magicians lived side by side until the power-hungry Mordred took more than his fair share, turning the dark side of existence against the bright light that was Camelot.  Uther defended his realm, but was betrayed by his evil brother Vortigern, who then attempted to kill the entire Pendragon line, cementing the throne in his name.  But young Arthur escaped to the city where he was raised by whores, where he was tested by the streets and found to be a natural leader of men.  Now returning as a hero of the people, Arthur must find the strength within himself to face his past, claim his father’s sword, and take the kingdom back from a man who is moving closer and closer to complete and horrible domination. In order to appreciate this film, you must sit down without the weight of prejudgment, as best you can anyway, because if you listen to the echoes of bad press you will find enough flaws to validate that opinion.  After all, this movie is definitely and admittedly far from perfect.  The acting by most involved is pathetic, a range of caricatures both in method and in foundation.  Arthur’s party is assembly line at best; a black guy, an Asian guy, a funny guy, a kid, a woman, a stern sergeant type, all coming together to make the middle hour of the film feel forced beyond belief.  Really, the meat of the movie is as banal as you can imagine, nothing more or less than typical medieval fare in how the story progresses and how the team comes together to beat the bad guy.  The last big negative is the action, especially in the last two fight scenes, which are done in a blur of CGI that was literally hard to physically follow with the eye.  This is a movie with a lot of problems, feeling rushed into theatres before it was quite ready to be shown.

But, and here I’m going to defend Ritchie and his bravado a little, it wasn’t all bad.  In fact, there is enough that goes right that should allow audiences to enjoy themselves, as long as they’re willing to focus on the positive.  I’m not saying that’s what you ought to do, but it’s something you can do, because a few strengths emerge that I would call just enough to carry you over the chasm that is the middle of the film.  One is the music, which could not have been better.  From the opening to the credits, this is a killer soundtrack that has British guts splattered all over it.  It’s raw, it’s cool, it’s hard, and it fits with what Ritchie was trying to do, which was to make Arthur a London street thug who rises to become something greater.  There’s a song at the end that just slayed me, “The Devil & The Huntsman”, and you should at least find that on Spotify.  Moving on, Jude Law is another strength, to the point that he basically carried the film and could be considered the main character.  Eric Bana was good, there’s a surprise guest who was shockingly excellent in a small role, the movie starts with a bang, ends with some cool content, and overall should be considered a fine rental to watch on your giant TV with a ton of snacks on hand and some time to spend on something that may be trivial but is also enjoyable.