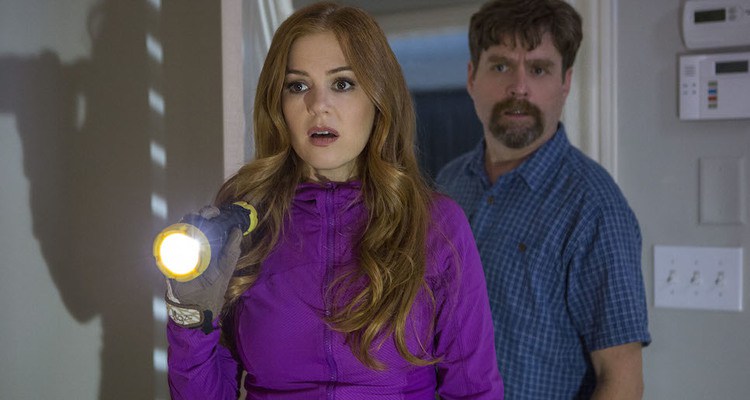 The director of Superbad is a cool dude in my book, so I’m more than willing to watch a much more tame, suburban, cookie-cutter comedy if Mottola chooses to helm it, in the hopes that it’ll accidentally be awesome.  Keeping Up with the Joneses will probably never be called that, but for my hour and forty-five minutes, I’m willing to call it solid.  It’s an unoriginal comedy about regular people interacting with hot people and hilarity ensuing; we’ve seen it before and we’ll see it again.  So while nothing in this movie will stick with you the next day, the content it funny enough to carry audiences through for a short while, and sometimes that’s all we need.

Jeff & Karen Gaffney live a quiet, predictable, safe life in the suburbs with their kids, on a cul-de-sac where everyone is friendly and nothing bad (or even exciting) ever happens.  Jeff works for a big company in HR, Karen is an interior designer, they may be a little boring, but they’re also pretty happy.  But things are riled up a bit when a new couple move in next door; the Joneses.  Tim & Natalie are attractive, interesting, attractive, spontaneous, attractive, worldly; they have it all.  Tim warms up to Jeff really fast, and he’s curiously curious about his job, who he talks to, and what they say.  Turns out, the Joneses are actually spies, and, get this, Jones isn’t actually their last name.

Watched expecting nothing more than a simple good time, Keeping Up with the Joneses delivers a few laughs and some mild entertainment.  While that doesn’t sound like (and isn’t) much, it’s something that too many other comedies fail to deliver, so let’s be thankful for what we get.  Galifianakis cracks me up, Fisher is funny, Hamm is a good actor, and Gadot is fine, though it’s obvious having watched Wonder Woman that she can do so much better, that she was only cast for her looks.  Speaking of, this movie is surprisingly sexy if you like looking at Fisher and/or Gadot in minimal clothing, so keep that in mind.  The story is silly, the end is predictable, but you weren’t anticipating anything more anyway, so sit back and enjoy just because; you could do worse.