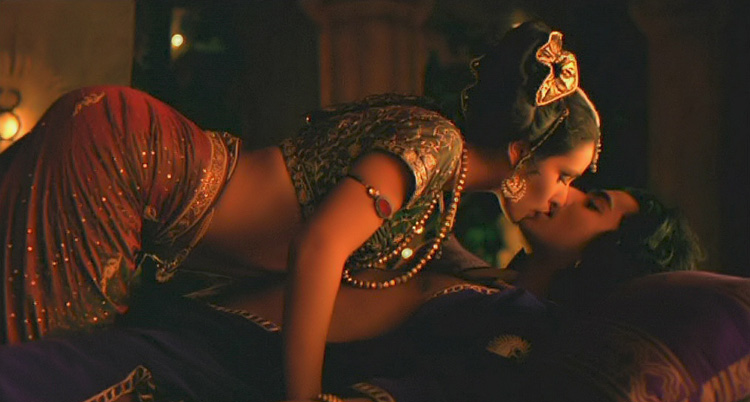 With a name like Kama Sutra, a film will garner a certain reputation. Sex positions, intense climaxes, basically soft core porn.  But A Tale of Love is the part of the title that should carry more emphasis, as this film is a romance first, a steamy romance second, not the other way around. This is a love story set in ancient India, a look at the traditions of the past with a melodramatic flare for our entertainment. It isn’t exactly Bollywood, but rather a mix of Bolly & Hollywood in a way that appeases our desire for that culture but with the added dramatic elements that we so often see in American movies. And the film is in English anyway, so look elsewhere for the musical you might be expecting.  This is paperback romance set in a foreign land, but not all bad for that.

Young princess Tara’s best friend and playmate is the servant girl Maya, and both grow up to be beautiful women full of a passion for the lives ahead of them. For Tara, that means a marriage to the King and a life of wealth & luxury. For Maya, that means a betrothal to Tara’s brother the prince, and shouldn’t a servant be so lucky. But things don’t always go as planned. As both their sexual and jealous selves awaken, the girls become rivals for the King’s affection, creating a war between them that can only end badly. So while Tara does become the Queen, Maya learns the ways of the Kama Sutra, becoming a vixen and a temptress in ways that no man can deny.

First, let’s talk about the sexual element, since that’s what may have caught your eye about this film or may be all you know about it. There are sex scenes, though brief, and not graphic compared to today’s standards.  It’s mostly breasts and the scenes are mostly short. The film is more sexy than sex-full, making it the perfect steamy romance without forcing it to be too risque. The sets and costumes are just as alluring, placing you right in the middle of the era, pleasing your eye with flowers and dyes and dresses and riches. The acting is a little cheesy, the story is a bit over-the-top, but it all comes together to create a vibrant atmosphere to enjoy rather than to pick apart. It’s a fine film without any real excitement, a movie that can be enjoyed by couples, if not exactly in the Netflix-and-chill way you might at first imagine.