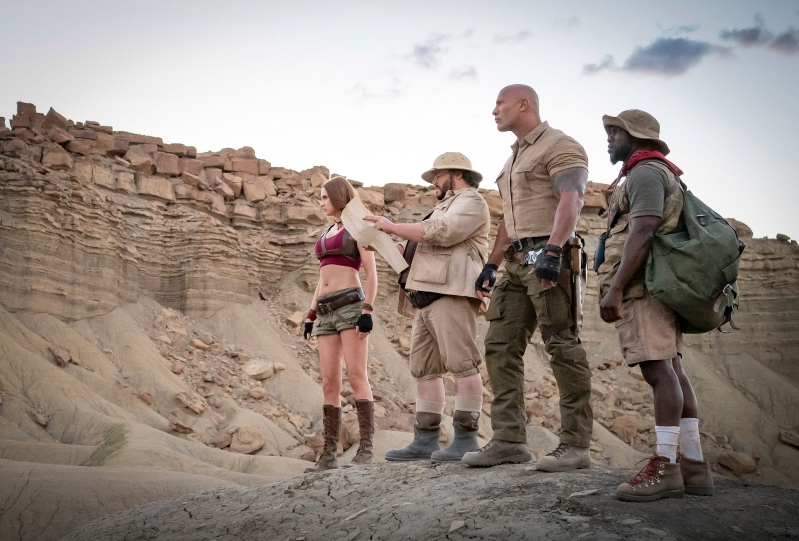 The Next Level falters for a reason that’s not its fault; we saw it coming this time.  Welcome to the Jungle was a surprise, it was shockingly fun, it was better than it had the right to be, and we clapped accordingly.  Apparently that then gave them permission to make a sequel, which we did not ask for, but was bound to make some money, so here we go again, but this time around we aren’t going to be charmed into enjoyment.  And because of that, the movie never had a chance in the world of reaching the already limited heights of its predecessor, it just wasn’t going to happen, the ceiling wasn’t high enough, which leads us exactly to the place we could have predicted with ease: fine, mostly fun, kinda dumb, and already forgotten.

The fearsome foursome have returned from the video game version of Jumanji, they’ve become fast friends despite their differences, but life goes on, and sometimes that means friends drift apart.  Spencer, specifically, is having a hard time adjusting to college life, and this leads him to repairing the cursed console and heading back inside the game, just so he can be Bravestone again.  But it’s not that simple; Jumanji is busted, and so the avatars don’t work the same way.  And there’s another problem; when Spencer’s friends jump in to save him, his grandpa Eddie and his grandpa’s rival Milo get sucked in too, so now they’ll all have to survive, beat the game, and exit Jumanji as two-time champs. Unfortunately, we can’t go back in time, forget about Welcome to the Jungle, and so be open to enjoying The Next Level just as much, that’s just not possible.  Our shock at liking the first film in a way prevents us from digging the second as much, which is too bad, because the sequel isn’t terrible, it’s just not news.  This time we’re prepared for a certain type of comedy and a certain structure of plot, and that’s fine; I guess amazing talent and bold new ideas could have forced us to give a standing ovation anyway, but obviously that’s not going to happen.  This film has a very low ceiling, its actors are only so good, and its director kinda sucks, so there we go.  The result is a movie that’s still fun, still did well at the box office, but can’t really be taken seriously.

The characters are switched up a little this time around, and that’s amusing, at lease for a minute, but it does grow stale pretty fast.  The only role I didn’t get tired of was Kevin Hart’s, as Milo the old guy; he was spot on and mostly hilarious.  The side actors kept things fresh as well, helping move things along when they could; Danny DeVito, Danny Glover, Nick Jonas, Awkwafina, Rhys Darby.  And at the end I thought it all came together well for a cool climax, which I wasn’t exactly expecting, so hats off there.  But the story was a little laden, focusing a little too much of their outside lives, and, this is gonna sound silly, but I was never worried that they weren’t going to make it out, it always seemed a little too easy, which I know is ridiculous, because of course, but I still noticed myself feeling that.  Anyway, go see this if you thought the first was funny, you’ll have a good time, no harm done, but probably no impact left either.