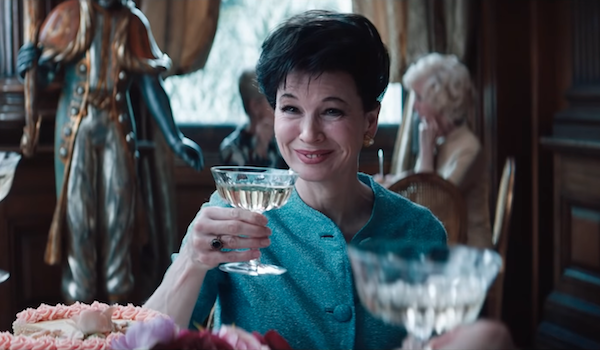 I guess being a washed-up actress who has destroyed her own face with surgical procedures has a silver lining; you get to play a washed up actress who has destroyed her own face with surgical procedures.  And maybe win an Oscar while you’re at it, so hey, maybe method acting isn’t a bad way to go after all; it works for Daniel Day-Lewis.  I obviously don’t know who had which work done on what, none of my business, but Zellweger has made some questionable choices at the latter stage of her career, choices that might accidentally lead her to an Academy Award for playing another woman who had her own problems, so I guess maybe you could say it all worked out.  Either way, Renee will be in the awards conversation when the time comes, and most of it is warranted, if not exactly comfortable.

We all know Judy Garland from The Wizard of Oz, but her voice and character are legendary as well, and she kept grinding on stage until her untimely death in London in 1969, at the age of 47.  This is the story of her final shows and final days, shipped away from her friends and family to England, where the public still clamored to see her perform.  Penniless and homeless, losing her children and her way, Judy headed across the pond to make another go at keeping the fame alive and the money rolling in, knowing that it might be her last shot.  What followed was a series of legendary shows; some famous for their grandeur and some for their disaster.  But it was all Judy, all her amazing voice and unique personality, even when her addiction to drugs began battling with her love of the audience, battling and winning.

Judy could sing, you can say that, and so can Renee, who does her own vocals and does a smashing good job in this film.  Her embodiment of the character is impressive, almost to an uncomfortable degree sometimes, and Zellwegger’s own decline and poor choices stand out as she plays a woman who ran headlong into the same snare.  Learning more about Judy’s past and ill-treatment is heart-breaking, it’s such a sad, sad story, so you’ll have no trouble empathizing for this women who has been used so badly over the years, until there’s not much left to her life but her voice.  But I never felt the same love for Renee, who gave this character her all, but never fully won me over, perhaps because of her own strange choices, strange appearance, and acting style which can easily be called one-level.  Garland is already an icon to many; if that’s you then this movie will speak to you directly.  If not, you have the chance to learn and understand her life, and Zellweger’s portrayal is definitely attention-grabbing, but sometimes for the wrong reasons.