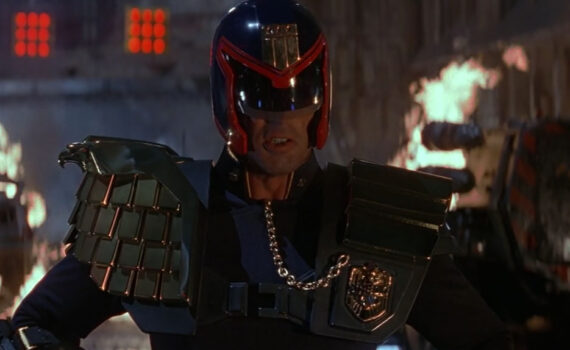 About as terrible a hideous mockery of the glory of Blade Runner as you can get, Judge Dredd is a movie that slaps you so hard it kills your brain cells and makes you a dumber person for the rest of your life.  It’s a comic book, it’s dystopia, it’s a ripoff, it’s everything we never wanted, and it’s also the most hideously-acted piece of rotten garbage that I have ever had the disaster to stumble across.  Needless to say, I did not find this sci-fi over-drama enjoyable, a la Starship Troopers; I found it stupid, insulting, ugly, and plain embarrassing.

In the future, all humanity will live in Mega Cities, walled off from the destroyed outside world, where the planet lies dying.  Crime is out of control, riots are commonplace, order is abandoned, at least until the iron fists of the Judges step in.  This new breed of policemen are judge, jury, & executioner all rolled into one, and they aren’t afraid to shoot first & ask questions later.  The most deadly among then; Judge Dredd, who seems to have been born to kill.  But when he is accused of a crime he didn’t commit, he finally understands that the justice system of the new world might not be at all just, just corrupt.

Oh my dear god what have I done.  Somehow I skipped watching this in the 90s, although I saw a lot of similar flicks in the 80s & 90s, and enjoyed many of them.  This genre can be fun; the future, flying cars, dirty streets, crooked politicians, a fight for survival, the pain of change.  Blade Runner, Running Man, Fifth Element; there are a ton that come to mind, but this is definitely special among that group, in that it’s the worst movie ever made.  Just pathetic and silly and farcical and unoriginal and dull; it’s everything bad rolled into one festering wound.  Sly was as bad as I’ve ever seen him, the rest of the cast was a joke, even though you know the names, and every scene seemed to be competing with the preceding to see which could injure us more.  I feel that my taste level has taken a hit and that I need to watch something very good very soon, or else risk a permanent step back.  Jesus.