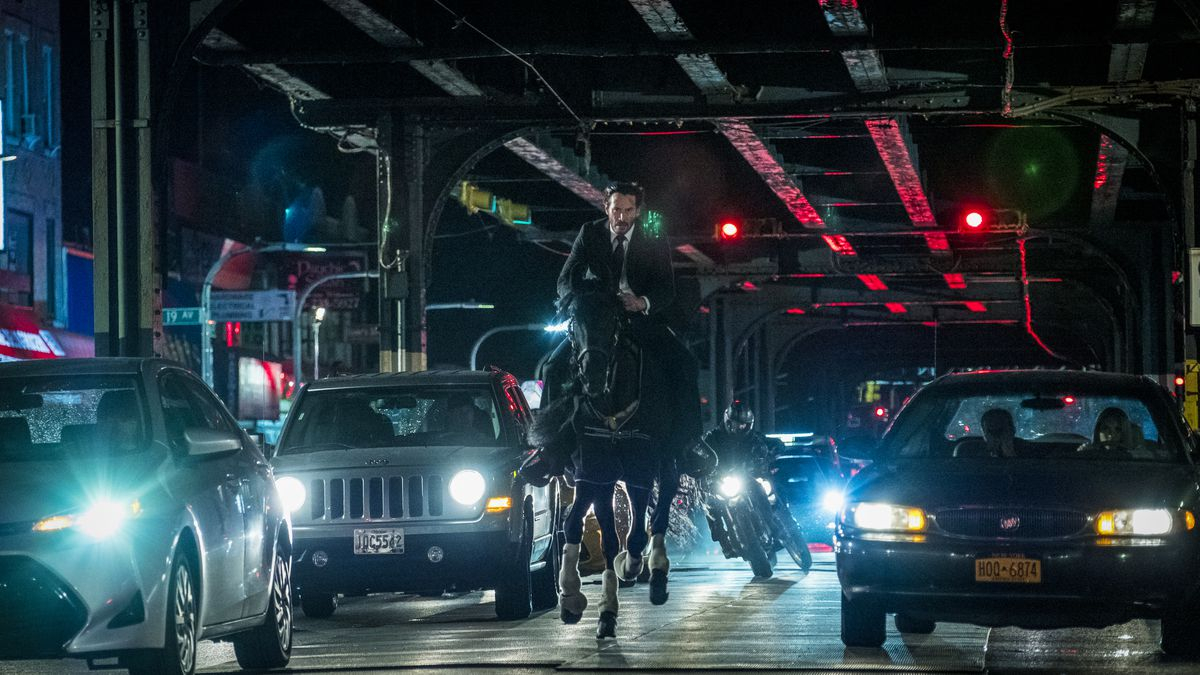 While John Wick 1 surprised and John Wick 2 gave fans more of what they wanted (if at a lesser quality), John Wick 3 failed to do anything other than throw some random punches, most of which didn’t land.  The phenomenon of the first film can’t be overstated; it came out of nowhere and blew us all away.  It was fun, fantastic, high-energy, high-gore, took us deep into a cool underworld, and let us enjoy ourselves.  Much like Fury Road did for explosive action, John Wick tried to do for close combat, and mostly succeeded.  The sequel tried to give audiences more of the same, more of what we desired, and, again, for the most part was successful, although the acting took a turn for the worse.  The third installment, which apparently isn’t the end of a trilogy, can only wildly slap at shapes in the dark, never showing us that it has any idea what it’s doing beyond being nonsensical, gratuitous, and ultimately dull.

First he tried to get out, but he was pulled right back in.  Then a debt was cashed in, and he had to fight one more time.  Now he’s broken all the rules and must pay the price, which is, of course, his life.  John Wick might be the best to even answer the phone when a hit was ordered, but now others in the secret world of assassins have been tasked with taking him out; how’s it feel to be on the other side, John?  A bounty has been placed upon his head by the High Table for breaking the ancient pact, and his friends have been forced to turn on him, or be excommunicated themselves.  How will Wick survive the night, let alone long enough to collect all his debts, burn all his bridges, and turn the tide of the war in his favor?  But I wouldn’t bet against this man, especially, ahem, since they’ve already announced a fourth film in the franchise. I joke, but we know John Wick’s life isn’t really in danger, as long as there is more money to be made by the studio; he’s too valuable to be killed off.  Not that knowing that ruins the action, it’s typical enough for us to know the plight of the hero without being too worried for him, that’s part of suspension of disbelief I guess, and I’m fine with that.  But it does make two hours of guns being shot in John’s general direction a bit less exciting, since you know he’s gonna be OK.  There were scenes here in which literally dozens, maybe even a hundred, bad guys are shot one at a time, wave upon wave of fonder for Wick and his friends to feed on.  By the end, I was honestly bored to death; after the 900th shooting you start to be immune to the violence.  You shut down because, hey, what else are you going to do, and the blood starts to lose its appeal.  That’s exactly what happened this third time around; I had seen the same thing so often that I simply didn’t care to watch anymore.

Those looking for that sort of action won’t be disappointed, there’s gore galore, but the multiple it-factors in the first film are why we fell in love, not because Wick can shoot henchmen, those movies are a dime a dozen.  All that heart and intrigue and humor were gone the third time the plot was recycled, and no one seemed too interested in bringing anything to the forefront that would make an actual good film; they probably already knew we were hooked and didn’t care about us getting fed anything real.  But that wasn’t even the biggest problem I had with the film, the over-action was perhaps expected, but I didn’t know that the acting would be so god-awful.  Even Keanu seemed checked out, or to have shed whatever it was that pushed John in the first flick, because his character was completely DOA.  And dear god was everyone else so much worse.  Ian McShane and Halle Berry were fine, I guess Laurence Fishburne and Lance Reddick were too, though they weren’t anything to write home about.  The major problem was Asia Kate Dillon, who was horrendous, unspeakably awful, and never should have made it past OITNB.  Also, are you kidding me, the main villain is the guy from Iron Chef who does a flip at the beginning of the show?  Seriously?  Like, seriously?  Don’t forget Anjelica Huston with the worst Belarusian/Russian/generic Eastern European accent you will ever hear, no way, can’t forget that.  These poor choices show just how much magic was left in the hat, and it wasn’t more than a pinch, not nearly enough to make a third film stand up, not even with horse rides, killer dogs, big guns, and ballet dancers.  I think it’s safe to say that the shark was legitimately jumped, and the fall back down to Earth was more painful than I had expected.