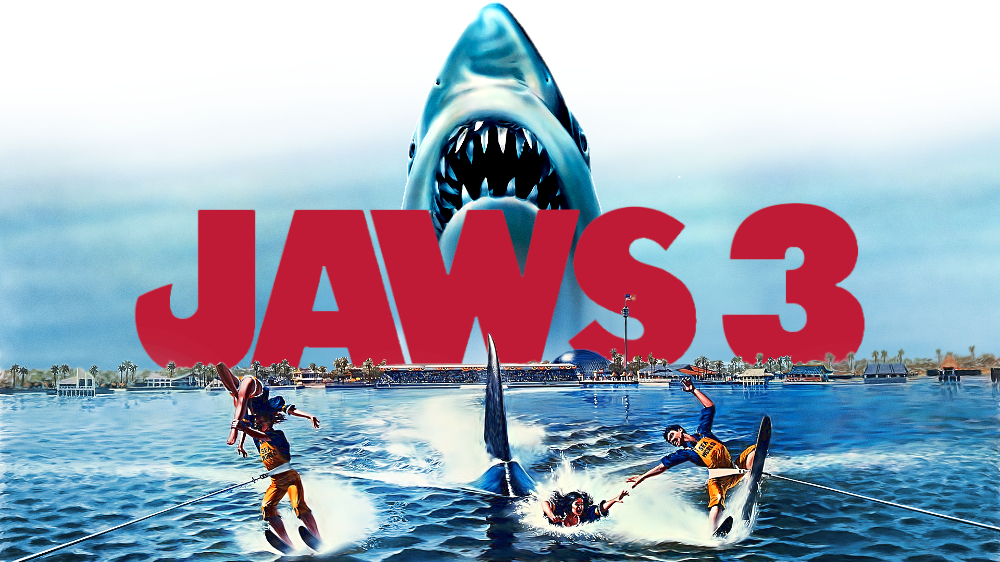 There are plenty of terrible movies in the sea, and then there’s Jaws 3, the worst movie ever and you don’t even have to go out in the ocean to find it, it just swims up into a Sea World near you and bites you directly in the ass.  Jaws is legendary, perfection, clinical, and even Jaws 2 isn’t all that bad; at least it’s entertaining horror.  But Jaws 3 is a travesty, a sham, and a mockery; it’s a traveshamockery!  It’s literally one of the dumbest movies ever made, and the fact that it was in 3-D makes it even worse somehow.  The legend dies with a whimper, not a bang, and we are reminded that sequels, remakes, and re-dos simply suck.

The Brody Bros are all grown up and have lives of their own now; Mike engineers underwater apparatus for a local water park, Sean is a student majoring in girls, girls, and more girls.  Neither has completely moved on from the deadly attack by either great white when they were kids, but they try to make the best of things, and it’s actually going well; Mike has a serious girlfriend, Kathryn, who works at the park with the animals, and when Sean comes to visit he immediately falls hard for Kelly Anne, a pretty little water skier.  But the dangers of the past have found them in their idyllic state; a shark comes into the lagoon just as the attractions open, and begins its reign of terror among the fish and the guests, bringing back all those bad memories and killing all those innocent people.

If Jaws was a horror/adventure and Jaws 2 was straight, bludgeoning horror, Jaws 3 is an amalgam of every bad idea anyone ever conceived as it relates to action, adventure, horror, the ocean, dolphins, engineering, romance, or humanity.  It’s bad on par with the worst ever, and that’s despite its stars: Dennis Quaid, Louis Gossett Jr, Lea Thompson.  You can tell there were ideas here, they just happen all to work terribly, combined with visuals that make you want to rip out your own eyeballs.  The 3-D gimmick is dumb, the story makes no sense, the effects are laughable, and nothing can save this film from itself, it only rolls blindly in the mud and eventually, mercifully, falls off a cliff of its own making,