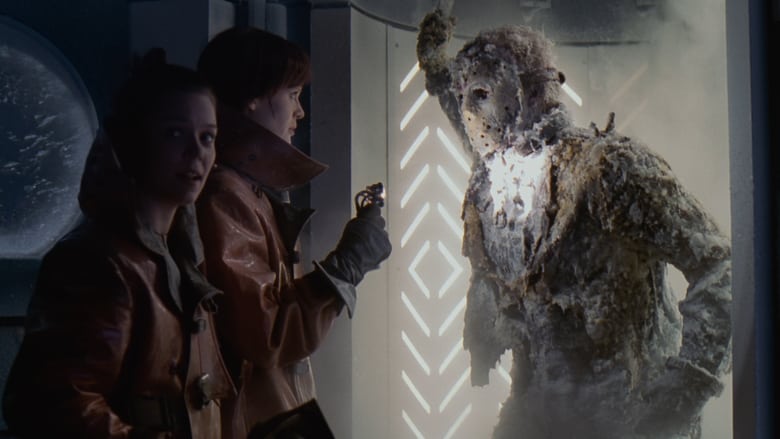 Jason X is kinda like Doom meets Prometheus, with a slasher background that gives it some footing in another genre, if not exactly setting it up for success.  You could also look at it as Friday the 13th meets Lockout, which might be more accurate to how it ends up; bloody and bad.  Twenty years after the original, I guess there was nothing left to do but jump the shark, if you weren’t willing to let the franchise die, which would most definitely have been the humane option.  But no, Jason is buzzed back to life once more, and this time might be the most grueling of all.

After so many killing sprees, Mr. Voorhees has been imprisoned with a plan in place to freeze him for eternity, so he can hurt no one else.  Well, of course he escapes, but only so far, and is then cryo-captured by the plucky Rowan, who is accidentally frozen with him.  Hundreds of years later, their bodies are found by a science team from Earth 2, and brought on board a spaceship for reanimation.  The crew doesn’t know how bad an idea that is until Rowan is awakened and Jason is set loose.  Now they must survive an instinctive killer, and finish him before he can do damage to a new world.

Horror in space, sure, but slashers?  That doesn’t exactly work the same, and this plot was a giant problem from the get go.  We love Halloween, Elm Street, Friday the 13th, but they work for a reason, and that reason is pretty formulaic, not easily adapted to fit into other genres.  Plus, this movie has a talent level problem, in as much as it forgot that actors need talent.  As they were, these professionals seemed more like buffoons running around in the dark, sometimes taking their shirts off, sometimes getting their necks broken.  It’s a bizarre and unnesseccary film, with an insane plot that must have taken a very special crew to craft this badly.