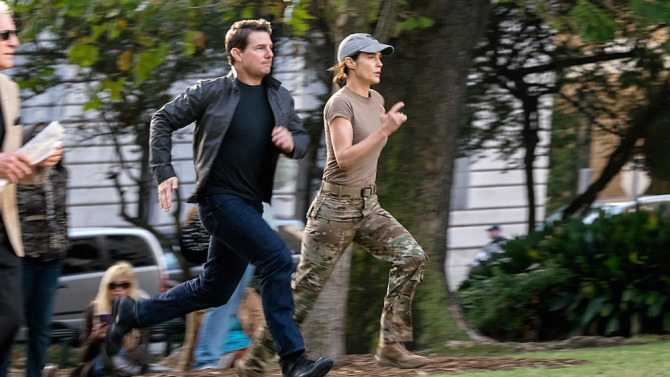 The most annoying variety of action hero is the one who knows everything before it happens, including exactly where each villain will throw his next punch.  In the original Jack Reacher, the title character was both portentous and pretentious, rubbing his seemingly psychic abilities in our faces in the form of handwritten notes with the answer to our future questions written on them.  Heroes like James Bond or Ethan Hunt often end up one step ahead of the evil doers, that’s how they win, but rarely are they as smugly and unbelievably knowledgeable as Jack Reacher.  One thing that can be said for the sequel, Never Go Back, is that the filmmakers understood this flaw and fixed it, although going the alternate route, keeping Reacher in the dark more often than not.  Either way, this franchise is a complete bust as far as content and quality go, and I pray that no one ever makes a JR3, because I fear that I’ll be compelled to watch it.

Completely separated from the first film, more like an episode in a series instead of a continuation of a story, we meet the infamous Jack Reacher on the road again, doing good because he can, walking away because he wants to.  But he’s made a connection via phone to a woman who works in his old office at his old stomping grounds, a Major Turner who is curious about Reacher and thankful for his help in certain cases.  But when she gets into some trouble of her own, she doesn’t want to pull him into the mess, requesting that he stay away.  Of course, he doesn’t, so Reacher is back on the case, imagining scenarios, finding clues, spotting tails, and generally kicking ass.  A government conspiracy might go up to very high levels, and might be putting the lives of thousands at risk.  Can Reacher stay alive long enough to solve the mystery in time? That was my biggest complaint about the first film, that Reacher was so ridiculously smart that he always knew the exact right thing to say, had the answer to every question, could dodge anything thrown at him.  It was an insulting film, pandering down to audiences who were admittedly looking for pure entertainment, but still deserve better than they got.  In the sequel, Reacher takes a different path, knowing very little and always being surprised when goons show up around every corner.  He always wins of course, because he saw their military haircuts and could punch them in the face really hard before they could get up out of their seats.  It’s a shockingly unbelievable and silly movie with contemptible heroes and ridiculous villains.  Reacher and Turner spend much of the movie literally running sprints, because that’s the best way to move unseen, running across a park with Baywatch credibility.

If I had to choose between the two approaches, I would pick Jack being flawed over Jack being omniscient, so I guess that was a step in the right direction, but one thing that definitely was not was the cast.  Cobie Smulders is a huge drop off from Rosamund Pike talent-wise, and the film in general lacked the quality peripheral actors from the last film, namely veterans like Richard Jenkins, Robert Duvall, and David Oyelowo.  Instead, this movie added a kid character, and I literally wanted to painfully pinch myself so that I’d feel something other than complete mental agony each time she opened her mouth.  Danika Yarosh might be the worst young actress I’ve seen on screen in the last ten years, and I wish that was an exaggeration.  Edward Zwick, though a quality director, could not save this franchise from failure, and even his attempts to make Tom Cruise look exactly like Maverick (which were successful) couldn’t hide the multitude of flaws in the film.  I strongly hope we’re done here and that we can let Cruise head back to the M:I series, something that may also be toss-away but is at least well-made.