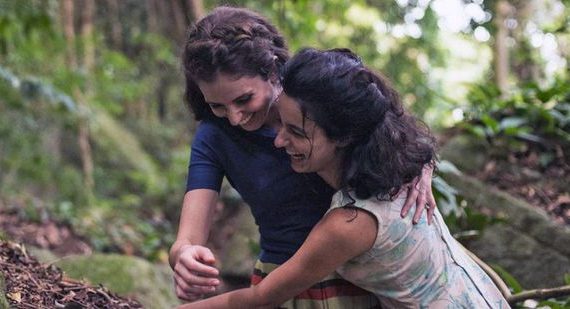 A foreign film that didn’t make the short list for the Academy Awards, Invisible Life is nevertheless a powerful non-English feature that tells a haunting tale, if in a fashion that won’t excite audiences to run to their nearest friend and tell them the wondrous news.  In many ways, this movie is an attempt, rather than a success, at saying something special, at delivering a tale that will break our hearts, while exhibiting a standard that will hold up when compared to the other fine films competing for worldwide attention.  Basically, Invisible Life is strong enough to withstand scrutiny when seen, but will rarely be noticed, partly on account of the shear volume of cinema audiences will never get around to and partly because of its own inherent weaknesses.

Guida and Euridice are inseparable sisters living in Rio in the ’50s, just approaching womanhood and the choices that will soon confront them.  Their parents are living in the last century, causing Guida to date and dance behind their backs, while Euridice, shy and extremely talented at the piano, makes her excuses.  When Guida thinks she has fallen in love with a sailor, she runs away from home to find adventure, slinking back pregnant and embarrassed and abandoned.  Her parents lie to her and tell her that Euridice has left the city to follow her own path, when in truth she has mourned the loss of her best friend and has succumb to the traditional pressures of her family, marrying and having children of her own.  Both are desperate to find the other, both are miserable in their own lives, and neither can stop picturing the imagined glamour that the other must be experiencing far away in a place where maybe dreams come true.

The story is enough to break your heart, two sisters told lies to keep them apart, one an outcast, one having completely given up on her talents and her hopes, both wishing the other a life of happiness while hating every day spent apart.  It’s so sad, but awfully honest, and never gimmicky; there is one scene where they almost run into each other, but it doesn’t feel like a bait & switch, it’s just awfully bleak.  The film is that way on occasion as well, to a fault, just depressing and weighted and dull, showing well that life isn’t always roses, but forcing audiences to decide between the self-preservation of closing off a little or the utter madness of giving completely in.  It’s also a bit longer than it needs to be, but the ending is great, the music is strong, the meaning is there, you’ll feel the feels, it’s just a lot of work and you’ll probably come away completely emotionally drained.  Is that a ringing endorsement? No, but there are many strong factors as well, the film has real heart, and its raw honestly is one of its greatest features, if you can watch it and live to tell the tale.