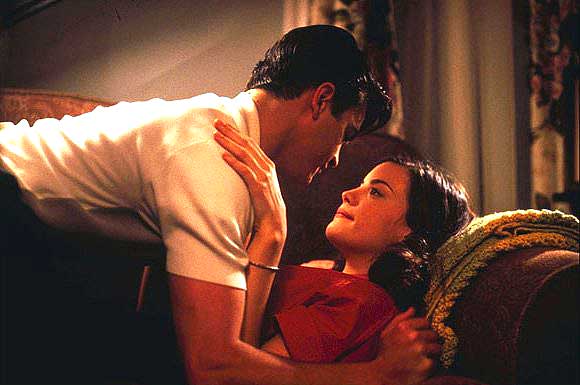 Lately I’ve randomly been watching movies with excellent ensemble casts, and here’s one more.  But this time is unique in a very specific way.  It’s a very young cast, four main characters who used this movie as a platform to launch their careers.  But they didn’t do it in an American Pie sort of way, exploiting themselves for the sake of fame.  And they weren’t already household names based on other projects, looking to make themselves into adults overnight with their roles here.  So you can look at it as a Brokeback Mountain moment for a quartet of young stars, but all the more daring for being earlier in their careers, not having a hot director take on the project, and not looking to make a splash at the Oscars.  Inventing the Abbotts is just a great film that happens to showcase the early talents of some great actors, and for that I will always love it.

Small town life in the late 50s; peaceful and complicated at the same time.  For the Holt brothers, this joy and stress all radiates from the Abbott girls, three sisters who spin Jacey & Doug around in circles.  The Abbotts are wealthy, popular, prestigious, and throw the best parties.  The Holts are poor, without a father, a little lost, and can’t seem to escape a connection to the Abbott destiny.  Jacey is jealous of the Abbotts’ wealth, angry that his father was once business partners with Lloyd Abbott but didn’t leave any money behind.  Doug is more vaguely aware of the Abbott’s sway over him, not harboring the issues his older brother can’t forget.  When Jacey falls for Eleanor Abbott and Doug falls for Pamela, the brothers begin a series of years that will change the course of their lives, force them to leave the small town they both love & hate, and forever connect them to a family that will always be larger than life.

This film certainly has a style all its own, something you have to adjust to early if you want to enjoy it.  There’s a great 50s vibe, a narrator in the style of the times, and a use of language that fits the setting but can sound a little awkward.  Michael Keaton is actually the voice of the narrator and does a great job.  So does the entire cast, for that matter.  Joaquin Phoenix has always been and will always be a terrific actor.  He’s just so natural, so honest, and never goes too far.  Billy Crudup was made for this part, the brooding brother, handsome & tortured.  Jennifer Connelly is beautiful as always and perfect in this smaller role.  And last but not least, Liv Tyler, who isn’t a wonderful actress, but pulls off the young, naive, rich girl very well, playing off Joaquin with great skill.  Inventing the Abbotts is a gem of a film, with an original feel, a spectacular cast, an ease of delivery, and a time capsule approach made doubly awesome watching the movie almost 20 years after it was made.  It’s a movie of quiet moments and of memorable scenes, a coming-of-age story expertly done.