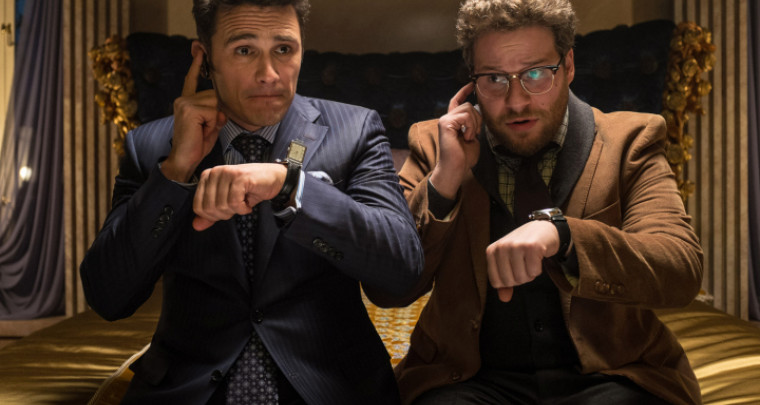 What a bizarre way for a film to open.  I’m not talking about the first scene of the movie, but rather, and of course, about the way in which the film was delayed.  Most likely, if you’re reading this review, you heard about the Sony leak, the information hack, and the subsequent threats that surrounded this movie.  Theatres were told that they would be terrorized if they showed the film, that there would be “9/11-style attacks”, basically that people would pay.  All for a comedy about killing the leader of North Korea?  Guess it hit a nerve, or someone just wanted to cause trouble, but it worked, because the studio pulled all showings.  Later, they would release the film on the internet, on demand, and also on streaming services.  That’s a lot of fuss surrounding what was never going to be a phenomenal or ultra-political film, and probably got a bigger audience to watch it than it actually deserves.

Dave Skylark is America’s leading celebrity news host, breaking all the steamy stories, interviewing all of Hollywood’s hottest.  His producer, Aaron Rapaport, is the brain behind the operation, and together the duo are bringing in the big bucks.  But that’s never been quite enough, hasn’t earned them respect as journalists, and they’d like to do at least on big, important interview.  And that’s where Kim Jong Un comes in.  The reclusive leader of America’s #1 enemy is a big Dave Skylark fan, watches all the shows, and has granted him an exclusive interview.  Sounds great, but the US government is about to cut in on this dance.  The CIA wants Dave & Aaron to take Un out, assassinate him with deadly cunning, something that the friends have never possessed.  Now they’re off to North Korea to kill a world leader; good luck guys.

I tried not to let the hype affect me, cause I knew going in that this wasn’t going to be a perfect film.  It’s a Goldberg/Rogen movie after all, and was always going to be stupid.  Superbad, Pineapple Express, The Watch, The Green Hornet, This Is the End; idiocy all, but I can’t say I didn’t enjoy some of them.  It’s just dumb stuff, full of body fluid jokes and marijuana, but usually just smart enough to make a funny story.  If you’ve seen these guys’ movies you know what to expect from this one, cause it’s not much different.  The setting changes the humor just enough to make it seem fresh, since they’re not just sitting around in their own basements smoking pot.  And James Franco actually takes on the lead role with a little bit of talent, which was surprising.  I thought Seth Rogen would take the lead, but this was Franco’s film, and he didn’t even screw the whole thing up.  The plot was wrong (of course), offensive, ridiculous, filthy, insane, but always tongue-in-cheek enough not to be repulsive.  At least not to me, and I assume not to the majority of people who sought this movie out, since we went into to it knowing and accepting that we’d hear way too much about Franco’s penis & Rogen’s anus.