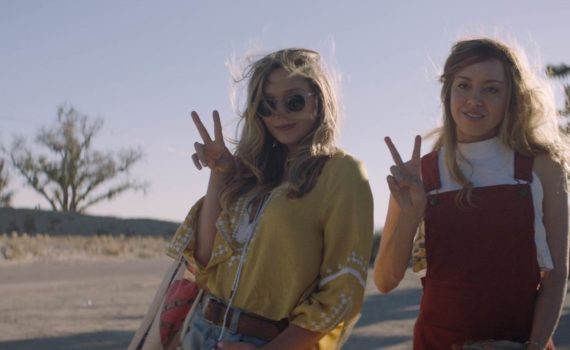 Always game to mock/critique the trends in society that they view as banal, moronic, or ill-formed, filmmakers and artists of all kinds are now setting their sights on the culture of social media, especially millennials and the seemingly inauthentic manner in which they communicate.  Black Mirror did a poignant episode starring Bryce Dallas Howard on the dangers of how desperate we can be for the approval of others, especially as it pertains to our online personas, and now Matt Spicer delivers his own take on the exposure of this strange ritualistic behavior with Ingrid Goes West.  The message is delivered early; not everything you see on your phone is real, and your happiness shouldn’t depend on how many followers you have/how often they like your pictures of avocado toast.  But then there’s still a movie to watch, and that’s when things go downhill.

Ingrid spends some time in a mental institution banned from her phone after she becomes obsessed with an Instagram celebrity and attacks her when she isn’t invited to the poor girl’s wedding.  So now she’s got a restraining order under her name, her mother just died, and life basically sucks.  To pick herself back up again, Ingrid zeroes in on another young woman who seems to have it all put together; Taylor from Venice Beach.  She’s featured in a magazine, she travels the world, she eats beautiful foods, every day is an adventure, and she captures it all for her fans to see.  With the money left to her after the funeral, Ingrid heads out to California to reinvent herself and start over, which basically means following Taylor around, copying everything she does, stealing her dog, returning it as a hero, and beginning a friendship based on nothing but absolute lies.

Count me in as someone who has always been phenomenally aggravated by the amount of bullshit on social media platforms like Facebook, and I don’t even dive into Instachat or Snapgram or whatever you call it, I try my best to stay above.  Every “blessed”, every “YOLO”, every “foodgasm”; I’m sure I’ve taken a selfie or two, but I try to stay away from the Pumpkin Spice-scented world of fake sentimentality and competitive posturing.  Anyway, now that we’ve established that I’m obviously a person on an elevated plane of enlightenment, I got the gist of Spicer’s point, and he’s right in many ways, highlighting the stupidest things we do and say on the internet.  But that’s where the positives end.  The foundation of the film, the acting, the flow, the timing, the resolution; all of these things were inaccurately accomplished, amateuristically done, and you could always tell that no one actually knew where this movie was going.  In the end, it goes basically nowhere, and that’s disappointing.  Plaza & Olsen were fine in their uncomplicated roles, and Russell was forgettable as the straight man/boyfriend/voice of reason.  Billy Magnussen with a small part probably stole the show, while O’Shea Jackson Jr floundered because, duh, he’s not really an actor.  I was expecting something a little more edgy, but what I got was typical fare, neither awful nor incredible, something that deserves no second glance until it’s done again, this time with much more bite.