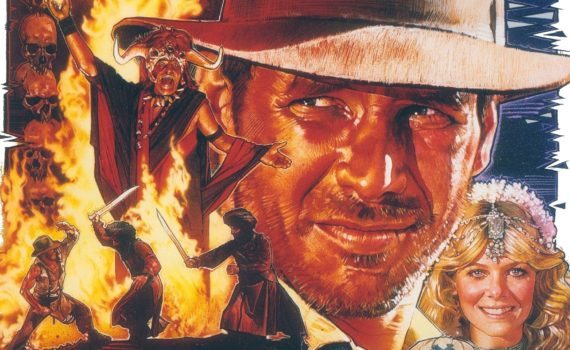 I tried applying the theory I used to love Raiders of the Lost Ark this time around on Temple of Doom, that we should try watching the films through their era’s eyes, because that’s when they were magical, but it didn’t quite work out; probably because the sequel is less an epic and more an epic disaster.  It was the 80s, things were silly, Indiana Jones is a pulp hero; I focused on all of that for the first film in the franchise and it helped me stay in love, forced me to remember my childhood fervor for Indy, since all the years that have passed between could dull our ardor somewhat, and I didn’t want that to happen.  But it’s not my fault this time around; the second in the franchise is a major step back, a complete farce, and to even stomach it you’ll need to remember what it was like to watch it when you were 10 and could be forgiven for some choices in bad taste.

Dr. Jones, the infamous archeologist, is at it once again, turning the world’s mysterious places inside out in order to find history’s lost magic.  And magic it is, for it seems wherever Indy turns up so does the supernatural, as if he’s dabbling in things he doesn’t quite understand and may get burned touching.  This time he’s in India, where a sacred stone has been taken from a small village, inflicting pain and pestilence on the population.  At a nearby palace, the Maharaja is dabbling once more in black arts, and is collecting the stones to further the glory of Kali, the god of destruction and power.  Indy and his friends, the lovely Willy and the rambunctious Short Round, will help him on his quest; to infiltrate the bloody rituals, retrieve the stones, free the captives, and stop evil from taking over the entire world.

Things I learned from watching Temple of Doom; it’s technically a prequel, Willy sings in a club called Obi Wan, and Dan Aykroyd makes an odd appearance as a Brit.  I was on the lookout for fun tidbits, because the movie itself really isn’t any good.  It’s so over the top, so ludicrous, so unforgivably poor, that it really doesn’t deserve the same consideration the first film gets; there’s no reason to hold back picky criticism this time, because the problems are too huge for fine-tuned instruments anyway.  No, #2 is a stinker (pun intended), and should be seen as such.  Ford is still great, obviously, and Short Round is a lovable character, there’s no doubt about that; his chemistry and improv with Dr. J is great.  It’s Kate/Willy who is the real problem, a bad actress in a bad role, without a chance in the world to rise up.  And there was so much animal humor/critter gross outs: why so many, Steve?  It came across as juvenile, even more so when I remember liking it as a kid, but it doesn’t have the same impact now.  There are still some iconic scenes, some fun moments, but this followup is definitely a cash grab and not an art piece; although it can still be enjoyed, it shouldn’t be respected.