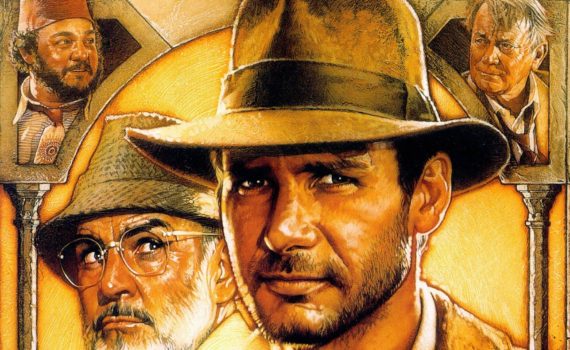 The third (and best) Indiana Jones film shows that Spielberg knew the exact problems of the second one and decided to go back to the formula of the first one, which resulted in adventure perfection and one of the best finales to a trilogy we’ve ever seen.  Last Crusade completely ignores that Temple of Doom ever happened, harking back to Raiders of the Lost Ark with content references, musical cues, Nazis, and more, completely going with the “if it ain’t broke, don’t fix it” mentality, which should have happened one movie earlier.  But at least they got it right in the end, and for the purpose of this review I’m pretending that Crystal Skull and whatever the new addition is going to be called don’t exist, because they are miles away from the original series and are obviously only modern cash grabs.  No, the base trio ends here, and it ends on a high note.

Dr. Jones has been fighting to put priceless artifacts in museums where they belong his entire life, standing up for what it right in the face of evil, even when the odds are stacked heavily against him.  We see this as we watch Indy as a young man, and it doesn’t change when he grows up, which is why he has to go after the Holy Grail when its location becomes something slightly more than legend.  For one, it would be the find of a lifetime, for another, his father is somehow involved and in way over his head, and lastly, the Nazis are back in the picture.  They want the relic for themselves, Jones wants it for posterity, his father has studied it his whole life, and a long list of others want to drink from it and live forever.  Well, Indiana is off on another adventure, this time with the fate of the world in the balance, and with family by his side.

All the tricks are back from the bag this third time around, because, hey, why not, they worked back in ’81.  The Nazis, the biblical references, a nod to the Ark, a nod to Marion, Sallah, Brody; the boys are back in town.  And it works, it’s not too much, it’s simply a return to what succeeded after a film that was, honestly, pretty terrible, despite how much I’m able to enjoy it anyway.  But the third is a giant step up from the second, a spectacular epic adventure tale that’s fun to watch from the very beginning.  We see River Phoenix as young Indy, we get Sean Connery as Henry Sr., we get evil Germans and tricky Austrians and boat fights and tank fights and booby traps, the whole works.  Ford wasn’t too old to continue the role, he pulled it off perfectly, the new music was spectacular, and the entire film feels like a wonderful bite-size chunk of Hollywood entertainment.  They should probably have stopped right here, and they did for almost 20 years, but I guess greed is pretty powerful, and art matters little in the face of profits.  Oh well, we have two amazing films in the franchise to remember fondly, and that’s worth a great deal.