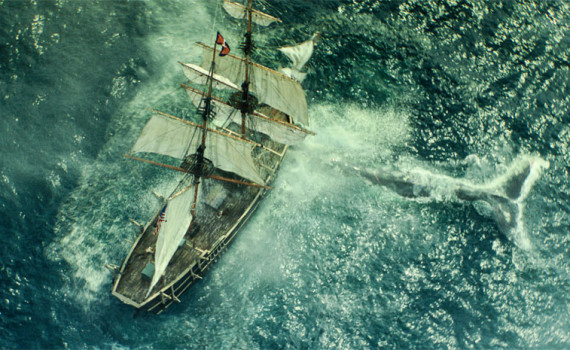 Moby Dick was the most difficult read of my life, and I’m an avid reader, classics perhaps foremost.  Not only was it long and written in an unfamiliar vernacular, but it was perhaps the most boring action story imaginable.  The plot was as much about the whaling process as it was Ahab’s obsession with the white whale, sparing no details on the craft, the weaponry, seaman’s terms, nautical concepts, and every day drudgery.  No, Moby Dick will never be my favorite book, and while I accept its prowess, I’ll never love its delivery.  So making a film based not on the novel but on the inspiration for the novel was an extremely smart idea, as was introducing audiences to a brand new set of characters on a brand new high seas adventure.  But while the foundation was solid for an epic and crowd-pleasing survival story, the execution missed the mark, making In the Heart of the Sea less clean-burning oil than blubber.

Herman Melville is fixated on writing the story of the Essex, a Nantucket whaling ship that succumb to misfortune at sea and lost most of its crew.  He knows that there’s more to the misadventure than is public, that the tale might make the novel of the century.  And so he seeks out Tom Nickerson, a man who was but a boy on board the ill-fated ship when disaster occurred.  After much persuading, Tom allows his mind to drift back in time to the days of the Nantucket whale oil boom, when that small island supplied the world with light.  His first voyage was on board the Essex, a whaler under the command of George Pollard, a rich young man of noble family.  First mate was Owen Chase, a gutty sailor who wished to be his own boss.  Their quest for oil would lead them to oceans not many had seen before, and to an encounter with a real life sea monster, one that didn’t want them to get home alive. From the very start, In the Heart of the Sea puts off its audiences with almost too many mistakes to list, though I’ll try my very best.  I saw the film in 3-D and never has it been more unnecessarily or uncomfortably used, especially in the beginning.  Even audiences who don’t see the film in 3-D will be subjected to shots through foreground images, forcing us to see the dimensions, to acknowledge the technology, something that I think breaks the fourth wall completely.  But perhaps you like 3-D, even if heavy-handed, so we’ll move on.  Look no further than the acting that is supposed to sell the love story that compels Chase to return home no matter the cost.  The chemistry was nonexistent between husband & wife, Hemsworth’s New England accent was …strong, and I was left feeling that I had watched one of the worst opening 30 minutes of a film of the last 10 years.

Things got better, I don’t mean to suggest that In the Heart of the Sea was a complete failure, but it had its work cut out for it.  The story didn’t end up being as exciting as I had come to expect from the previews, it borrowed far too much from other survive-at-sea movies, and Frank Dillane put on a performance as a minor character that was so absurdly awful that I wondered if the director owed him a favor.  What saved the film from complete annihilation were the scenes between Chase & Pollack, or Hemsworth & Walker, respectively.  Walker was brilliant as the young aristocrat, reminding me of Colin Firth and basically saving the movie single-handedly.  Hemsworth held his own, but ended up fine instead of great.  The film as a whole did the same, failing to become anything special, appearing as a combination of Master and Commander & Cast Away, but not as good as either.