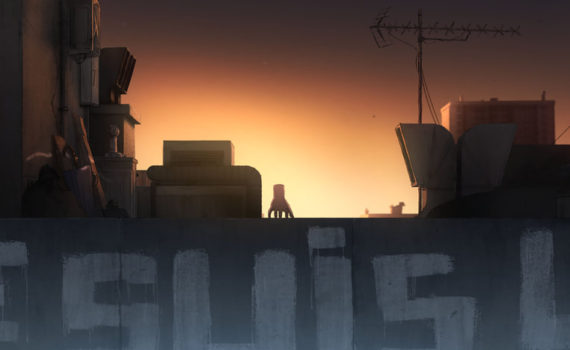 Apparently I’m not feeling the French films this year, as a few have come & gone without grabbing my attention or eliciting much praise.  Other critics disagree, they’re falling love, but I feel like we’re only getting the same melodrama we’ve seen before, whether it’s live action or animated, and I almost feel like the movies I’ve seen have been cliches of what you would expect from French art house, not elevated beyond what’s already come across the pond.  Regardless, just judging it on its own merits, I found I Lost My Body to be interesting but not captivating, curious but not enough to get me to follow it down its personal, pretentious rabbit hole.

Naoufel is an orphan who has just lost his hand; talk about things not going very well.  When he was a child, he was full of hope and promise, declaring that he would be an astronaut AND a pianist, ready to take the world by storm.  But an accident changed his trajectory, and now he’s a young man with no family and no direction.  A chance at love leads him down a unique path though, and perhaps there’s a light at the end of the tunnel, until another accident bumps him off the right road again.  Strangely enough, is own hand sets out on a journey to find him and perhaps set him straight again, reminding him of the dreams that he once had and the idea that they might not be lost for good.

What a strange and interesting story, mixed up in pieces and doled out a bit at a time, weird and kinda wonderful at the same time.  There’s a love story, a back story, a lot of sensationalism, and then a hand on a mission to find his body; yeah it’s odd, but it kinda works.  The problem is, I don’t think the film dedicates itself enough in any one direction to do one thing good enough to become great.  The music is cool, but the animation isn’t impressive, and the story meanders, perhaps making too many points all at once.  I hate to say it, but Frozen II should have been nominated Best Animated Feature instead of I Lost My Body, and not because it was more easily accessible, but because it got more right far more often.