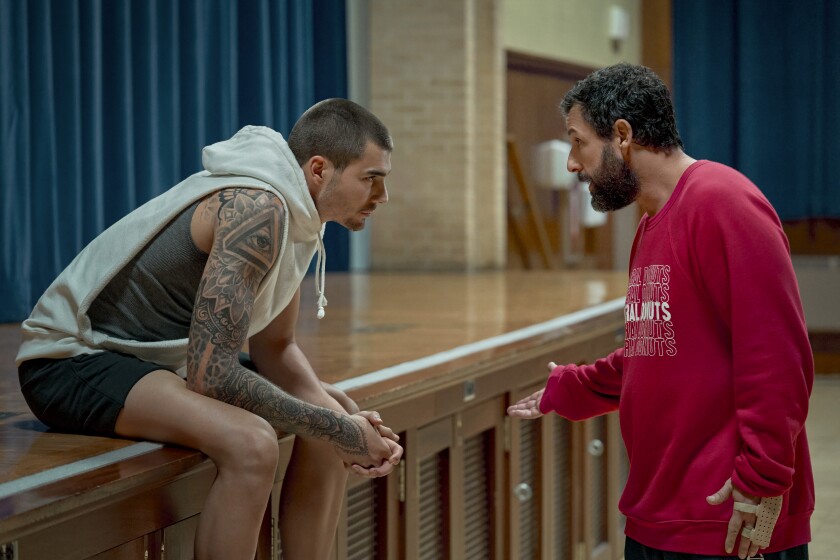 If you take Uncut Gems, Chef, & The Way Back and let them bleed together in their awkward hopefulness, the result is Hustle, a surprisingly good combination of ineptitude and basketball.  It’s less a movie and more a moment, a feeling not a film, like a homage to a game and the people who play it, with a small story to sweep us along, but with the knowledge of how that’s not the point.  An odd experience for sure, a love story about something you may not love, but somehow a pleasant success all the same.

Stanley Sugarman is an international scout for the Philadelphia 76ers, and his job is to find the next diamond in the rough & bring him to the city of brotherly love.  But when he finds Bo Cruz, a Spanish sensation playing ball in work boots and raising his daughter on his own, the wealthy powers that be say nah, he’s probably not as good as you think he is, Stan.  Well, Sugarman knows better, and he’s willing to put his career on the line for this young phenom; you don’t give up on what you believe in just because the path might be difficult, and you never *ever* back down.

Adam Sandler brings his A-game in Hustle, a movie that’s just him showing us how great the game of basketball can be, when you strip it down to man vs man, heart vs body, pushing though all obstacles for the love of the game.  Sandler acts his pants off too, maybe not to Uncut Gems level, but definitely something close, helped by the fact that he’s surrounded by real ball players, not actors, some of whom are being characters while some are simply themselves.  It’s a typical, feel-good, underdog story sports movie, you’ve seen the arc before, but that doesn’t mean you won’t want to see it again.  The heart is real, the love is true, and it’s a ton of fun, whether the acting can really support the film or not.  Like I said, it’s not really a movie anyway, it’s something different, and sometimes something different is exactly what we need.