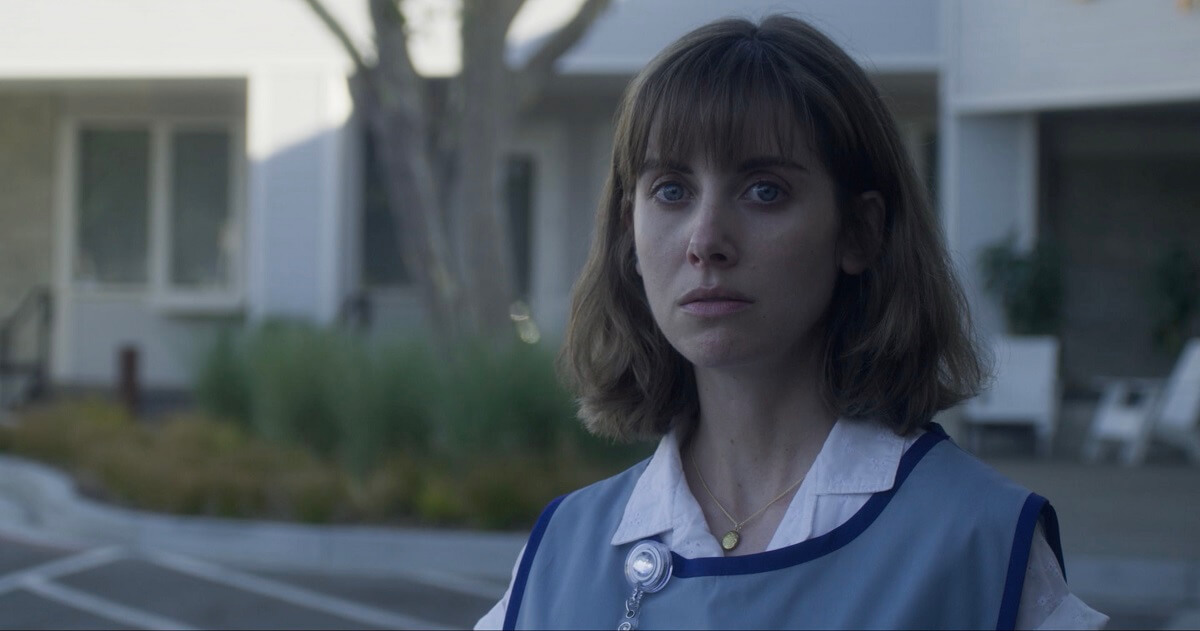 Straight from Netflix is an odd little drama starring Alison Brie that won’t be widely seen, but might just be wholly undervalued.  Director Jeff Baene deserves a mention from the top, for the films he’s written or directed: I Heart Huckabees, Life After Beth, The Little Hours.  But Brie co-wrote this movie, her first, and that shouldn’t escape mention either, because Horse Girl is surprisingly good, and in very surprising ways.  It’s not just a weird vehicle flick, not just another Duplass Bros. production streamer, it’s somehow more than that, and often has much more to say than what you might hear with half an ear.  Given a compete chance, Horse Girl has a message worth delivering, hidden somewhere beneath The OA-style bizarre-ness, and perhaps saved for those who are emotionally prepared to receive it.

Sarah is an old maid already and she’s only in her 30s.  She works at a craft store, does Zumba, likes to ride horses, volunteers at the stables, walks a young woman with a brain injury, makes lanyards and friendship bracelets in her spare time; she’s really the nicest person, but it’s also a little sad.  She’s never dated, sits alone at home every night, watches a sci-fi/crime show obsessively, and can’t really connect with the real world in a way that would lead to anything more meaningful than a passing hello.  What’s more, her dreams are becoming very strange, and her waking life is becoming more disjointed; sleepwalking, forgetting, losing time, questioning reality, developing conspiracy theories.  Sarah is slipping and there’s no one there to catch her before she falls down into a darkness from which she won’t be able to climb out.

On the surface, and at first glance, this movie is just wacky.  Sarah gets weirder and weirder, there are odd sounds, less makes sense, more goes wrong, and at points audiences will be like, “what the hell?” followed by a “OK umm this is too much.”  There are humorous moments, but mostly the film starts taking a nosedive toward insanity pretty quickly, which is the point where you will either give up or have a eureka moment.  Because the message here is clear if you want to see it; severe mental illness is a disease that is hard to stop from destroying your life.  Sarah is suffering, everything she is experiencing is pain, and that’s because her brain won’t let her live any other way, and that’s simply so very sad.  Seen with that lens, Horse Girl begins to make sense, it’s an exposé on illness, on schizophrenia perhaps, and though I’m not the right person to judge the accuracy, it sure feels like this is what it would look like to start what we used to call “going mad”.  The film itself is a cross between Welcome to Me and Unicorn Store, a deconstruction of a mental state streamed right to Netflix, and starring an actress who isn’t afraid to go literally and figuratively bare.  Brie is solid the entire time, so is the supporting cast, and if the final scene isn’t supposed to be realistic, if it’s also a metaphor, than the film ends in an interesting way, which can’t always be said of every good flick.  The run time might be a little long for a story with one main point, and the ceiling might be a little low considering the ingredients used, but this movie had me thinking, which I’ll take any day and be content with.