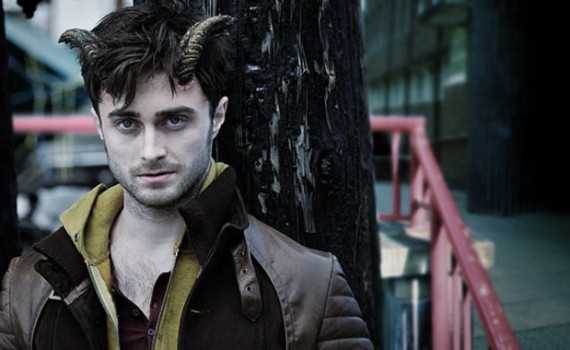 Daniel Radcliffe will always be Harry Potter, there’s just no way around that.  It’s the role that launched his career and made him a millionaire, so hopefully he looks back on it with pleasure, not resentment.  But despite how deeply ingrained that series is in the minds of audiences everywhere, Radcliffe is actually doing one hell of a job forcing us to remember that he’s an actor first & foremost, not just a solitary character.  When I saw him in What If he proved himself the real deal, much more than just a kid playing a wizard.  This is a young man with real talent, and, even in a movie like Horns, a film that won’t blow anyone away, he shines as a naturally gifted actor, someone whose best years are still ahead.

For Ig Perrish, the only thing weirder than the last few days is his name.  The small town life he once knew has been turned on its head, and he’s not sure what to do about it.  His girlfriend Merrin, a childhood sweetheart, has been murdered.  Ig is the prime suspect since Merrin broke up with him on the night she died, but he swears he didn’t do it.  Ig’s old pal is the sheriff, his other old pal is the town lawyer, and in a place where everyone knows everyone, Ig can’t go to the store without being called a murderer by people he’s known all his life.  But this is just the beginning.  As Ig falls deeper down into depression, horns begin to grow on his head.  Yes, horns, and they seem to convey a power over everyone Ig talks to, bewitching them into sharing their darkest secrets and desires.  Is Ig the devil himself,  a sheep in wolf’s clothing, or just your average horned man trying to get by?

It’s a weird plot to say the least, one I could see falling in love with when I was 16 perhaps, but times have changed.  It’s a cult classic in the making, Daniel Radcliffe becoming a demon of sorts and learning all about people’s odd sex lives.  Sounds intriguing and it is, but it’s also a big confused mess.  The story basically makes no sense and doesn’t try to, jumping from one moral to the next, with some really strong scenes scattered among a bunch of crappy one.  Joe Anderson was pretty incredible as Ig’s brother, with a strong drug scene that makes you feel something real.  And Radcliffe himself was very good, even pulling off an American accent and doing what he could with the role.  But, I mean, the role was a guy who grows horns, a guy who gets drunk a lot and wonders if he killed his own girlfriend.  Like I said, maybe I needed to see this when I was more impressionable and less critical, because it really doesn’t stand up.