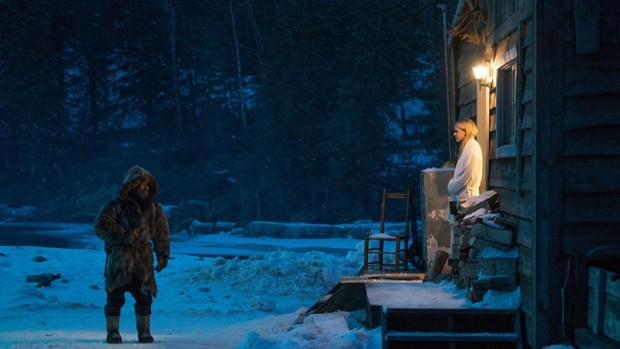 Saulnier’s three other films (Murder Party, Blue Ruin, Green Room) are based on blood and barbarism, in varied form, and Hold the Dark is no different.  You might think it is, by the trailer, which seems more organic and natural with a horror edge than simply murderous, but the plot quickly goes in that direction, and we’re abruptly left with a crime scene.  That was a bit of a disappointment for me, since I was looking for Wind River rather than Sheitan, but perhaps that’s on me for misjudging the style and forgetting who the director was; “be prepared” is good advice even if you aren’t a Boy Scout.  But now I’ve seen the movie, tried to judge it standing alone, and still found it mostly lacking, whether that’s on account of expectations or quality or both.

In Alaska, the land and its animal inhabitants can be an unforgiving team, making it crystal clear to those who choose to live there that they are not welcome.  For the Slones, and for multiple families in the area surrounding a small, mostly native village, this message comes in the form of savage wolves who steal children who venture too far from their homes, and don’t leave bodies to bury.  Medora Slone, whose husband is fighting in Iraq, has lost her only son to a pack, and to close the hole in her heart she writes to Russell Core.  An author, a hunter, and a naturalist, Core knows wolves better than anyone, and is uncommonly affected by Mrs. Slone’s request to find the animals that killed her boy.  But humans can be far more brutal than the rest of the animal kingdom, and they have a capacity for deceit and evil that is both unmatched and unnatural.

I didn’t get what I wanted from this film, which is partially my fault for having certain expectations, and partially the filmmaker’s fault for refusing to move outside his violent comfort zone.  Or else, if he did try, the result wasn’t something that you would predict from a successful filmmaker who needs to be improving with each project.  Instead, Hold the Dark is a step back.  It adds in elements other than simple, human, violent tendencies, it sprinkled in a little mysticism to move the plot along, but audiences will soon find out that this tease is just a sham, that Saulnier never intended for this movie to be anything but his typical style, despite the trailer and the buildup.  Even with solid actors, he can’t make something more deep from what starts well and intrigues the viewer, and perhaps it’s time to say that he’s just not able.  Wright and Keough, specifically, are great, and their scenes at the beginning are enrapturing.  But then shit hits the fan, the plot plummets downhill, and there isn’t time to recover, resulting in a film that only has its blood to bolster it, when it needs far, far more.