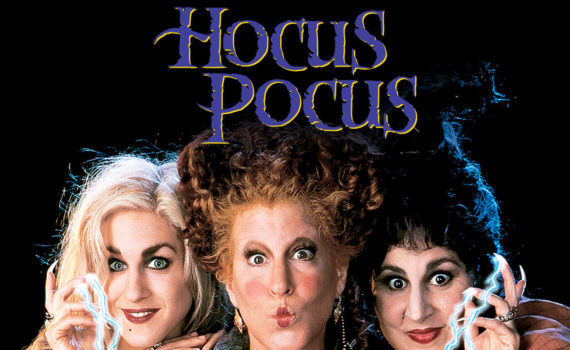 I have bad news; Hocus Pocus isn’t good. I know, I know, I watched it in the 90s too, I have memories of it too, but even then I knew enough to hold Goonies so much higher as a go-to creep-out, to hold back some reservations on HP because it was kinda obviously, and kinda sadly, not that great. Years later, I’ve now watched it with my kids, and can say that it still makes a very cool Halloween holiday experience, which I think is important, and that it doesn’t have much competition really, unless you want to watch Nightmare Before Christmas instead, which is the much smarter decision. Basically, I think we can and should hold this classic in our memories, it’s doing no harm, and there’s no reason not to pass it on to our children, there’s plenty of enjoyment to be had. But we need to stop short of calling this movie anything more than “weak but nostalgic”, because it definitely doesn’t deserve anything better.

In the town of Salem, 300 years ago, three witch sisters were hung and buried for trying to steal the souls of children in order to avoid their own mortality. Killing kids kept them alive, with the help of a living spell book, but their downfall put an end to their shenanigans, at least for a while. Legend has it that, if a virgin lights the Black Candle in the witches’ house on Halloween Night, they will come back to the land of the living to search for children once again. Max doesn’t believe that, but he sure starts to when he, his little sister Dani, and his crush Allison light the candle and meet the sisters, who are as nasty as their preceding reputation. Now they have until dawn to stop the witches from taking over the town, or the evil hags will live forever, and Salem will be no more.

I hate to say it, but I really do think that we might have been under a spell, like Midler says she’s gonna do in a very bizarre and out of place musical number buried in the middle of an equally strange movie. Our youth clouded our judgement and we clung to nostalgia; no shame in that, we love the films of our childhood, and we want to pass that along, we just need to be choosy and also be willing to admit it when we notice that some golden oldies don’t hold up as well as others. Hocus Pocus is weird, muddled, terribly acted, hard even to hear at times, and bounces all over the place until you don’t know which way is up. I guess that can also be fun, a wild, nonsensical romp, and maybe that’s why we fell in love as kids, but you’re better off holding to that memory than actually opening your eyes now, because you may not like what you see. I’ve never loved Bette Midler, the kids are terrible, the effects are silly, the only really strong thing that the film has going for it is that it captures the Halloween spirit like few others ever have, other than pure slasher horror flicks. I can be on two sides of the fence at once here, enjoying the memory and critiquing the film, which puts me squarely in the middle with my rating, I just hope I’ve warned you a little about what to expect, if you choose to take a stroll down memory lane; what you see might scare you, it just might not be in the way you were expecting.