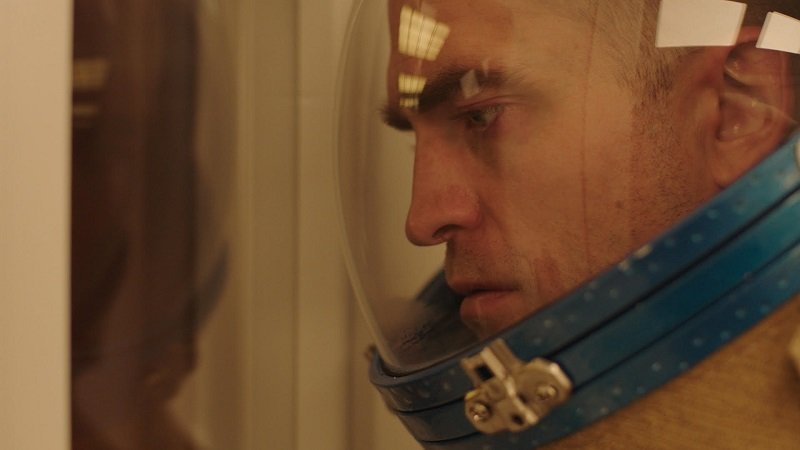 A bonkers space drama starring Robert Pattinson sounds like exactly what I signed up to be a film critic for, because these are the styles and actors that push boundaries, and that’s what fuels our love of the cinema.  I don’t mean to be over-dramatic, and ultimately I really liked more than really loved this movie, but I want to make that clear; not only is this my jam, but I think it ought to appeal to more audiences than it, in reality, does, because filmmakers and ideas like what are exhibited nicely here are the engines that turn the machine we so enjoy.  OK, enough of that, you’ll either appreciate it or you won’t, and god knows it’s not for everyone, but I hope enough notice the positives underlying what is basically an extremely bizarre two hours, rather than focusing on how unfocused the plot is, because that surely is not the point.

Monte lives in an ever-advancing space shuttle with a baby named Willow, but how they came to be there is a story that can’t be told easily.  It begins with a crime, or many separate crimes, leading to a sort of voluntary experiment for those whose lives are forfeit anyway.  They are rocketed away from Earth on a mission to reach a black hole, to send back data about possible energy uses, but never to return themselves.  Their secondary mission, spearheaded by the insane and murderous Doctor Dibs, is to further experimentation in artificial insemination, and to attempt to create the perfect child.  But the entire crew of the ship is criminal, knowledge that they’ll never see land again cracks their minds further, and playing God among the stars has dire consequences, no matter how far away from normalcy you might have strayed.

A couple years ago it seemed that every grand film of the season has lost its damned mind, had gone incredibly bonkers, but blew us away anyway; High Life would have fit very well with that group.  As it stands, it might be one of the strangest movies of this year, and also one of the strongest, coming around the corner in a surprising way, but holding viewers’ attention in a manner that doesn’t happen all that often.  Robert Pattinson is a tremendous actor, I hope that’s widely-known by now, and can pull off any role, even an odd space-murderer turned kind care-giver.  The film is as wacky as it sounds, and there’s some weird sexual content, but it all makes sense as a big picture, once you get past the peculiar details.  It’s also a strong metaphor for the “human condition”, as trite as that may sound; doesn’t make it untrue though.  It’ll surprise you with its casual violence, its inhuman dispassion, and then warm your heart with its unorthodox tenderness; it’s that sort of ride, from start to finish, one that can’t be easily explained or contained, but rather demands your time and effort and focus.