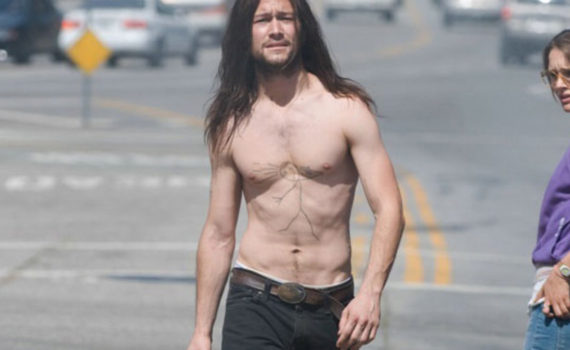 Hesher is the only real movie Spencer Susser has ever created, and you can see why he didn’t continue.  Not that I hated it, but there are people who consider this film an instant cult classic, an anti-establishment piece of cinematic art, and that’s just silly.  It’s a rough attempt to convey complicated emotions, which is the best that can be said about it; the worst is that it’s simply a random middle finger in a direction no one is standing, and in that case it’s best to walk away, because you shouldn’t stare at people who are obviously having issues and are probably on drugs.  Hesher is messy if a movie ever was, and its unfocused angst goes here, there, and everywhere until you have to start wiping it away before it starts to smell, which can’t be a good sign for a feature that features so many stars and is supposed to be something special.

TJ is a troubled boy who has just lost his mother, along with any direction his life possessed.  Now, he and his father are falling and moving apart, as neither of them can accept what has happened, and neither know how to keep on the path that once seemed so sure.  But someone shows up who will both throw everything into more chaos than before and also start to force TJ to see the true complexity of his feelings, and that’s dude’s name is Hesher.  He’s mean, he’s dirty, he could not possible give a damn about anything, and he’s perhaps exactly what two grieving guys need in their lives.  Problem is, he’s in their house too, and he’s hard to get rid of, this destructive force that can’t be contained, predicted, or diverted, at least until he’s done the job that he’s come to do.

The first mistake was making Devin Brochu a leading (young) man; whatever they might have seen during casting didn’t come through the camera, and there’s a reason you’ve not heard from him since.  The second mistake was fumbling Joseph Gordon-Levitt’s role, because he’s an incredible actor, but he’s not exactly Hesher.  He doesn’t quite work, while Portman & Wilson flounder too, the entire cast failing to come together in the right way.  Also, If you want to make Hesher a fantasy, an imaginary friend, whatever, go all the way, don’t play around with the idea that he’s not really there but also make him fully there, like he’s kinda what the kid needs on the inside but he’s also setting fires on the outside; just stop being weird.  This movie isn’t original, isn’t cool, isn’t edgy, it’s just trying too hard, and it doesn’t work the way you might have heard.